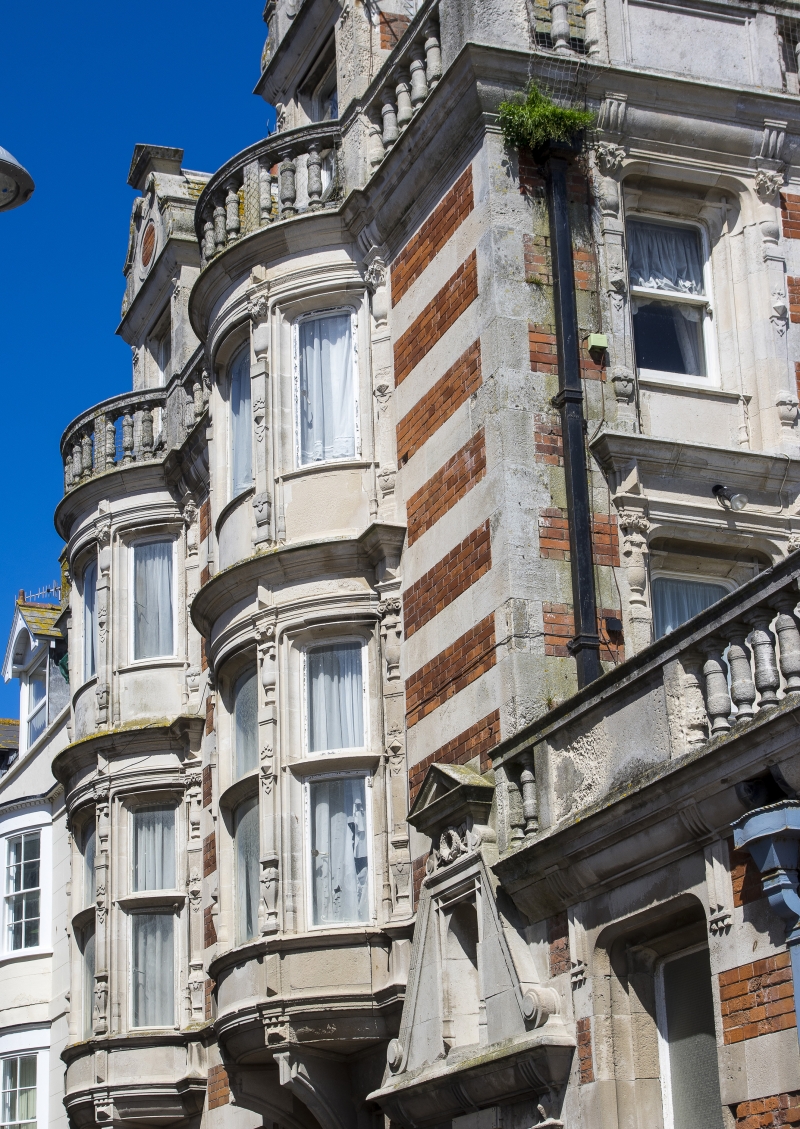 Formerly Westminster Bank, now holiday accommodation above
public toilets. 1883. Red brick in English bond, Portland
stone ashlar and dressings, green Westmorland slate roof.
A very vigorous interpretation of French Renaissance with
Flemish Renaissance details. A very steep hipped roof is set
behind a balustrade parapet with plain panels, above main
walling carried out in flush banded brick and stonework in the
manner of Norman Shaw.
PLAN: a long but shallow plan, with its principal frontage to
Bond Street, and returning with the narrow front to the
Esplanade, where it reduces to a single-storey flat-roofed
pavilion. Ground floor is now in use as public conveniences,
and the upper floors, approached from the Esplanade are used
as a boarding house.
EXTERIOR: 3 storeys, attic and basement. The Bond Street front
is in 2 bays, plus the single-storey pavilion to the right.
The principal range has lofty Dutch-gabled dormers with
scrolled pediments behind the balustrade with corner urns,
inflected to the oriels below, which are deep semicircular
bows in 2 floors containing plain lights with curved plate
glass, and with a transom at first floor. The stonework is
richly detailed, including decorative pilasters and moulded
entablatures; the oriels are carried on bold paired stone
brackets which spring from broad mullions in the ground-floor
windows, which are of 2 and 3-lights respectively.
To the right is an arched doorway under an entablature and
high trapezoidal head with scrolls and a small pediment; the
heavily modelled original 3-panel door with embellishments is
still in situ. In the ashlar plinth, which rises to the ground
floor sill level, are 2 openings with segmental heads to
Mannersit keystones, and a grille with pavement access to a
basement.
The pavilion to the right has a lofty single light with
transom, and, low right, a plain square opening with a door
under a transom light. This unit has a stone balustrade with

some plain panels, and the high plinth, both continued to the
short return front which contains a pair of 2-light casements
with a transom and king mullion. The main party wall to the
left has a lofty banded stack with dentil capping, tied back
by a slated gable roof to the steep hipped end with vase-like
finial.
On the Esplanade front, behind the single-storey pavilion, the
main gable wall contains a single light each side of central
walling at first and second floors, under the continued
balustrade with corner urns. At the centre is a lofty banded
stack, tied back to the steep hipped roof by a slated gable
roof, and with a decorative scrolled pediment at half-height.
The capping has a dentil cornice.
INTERIOR: not inspected.