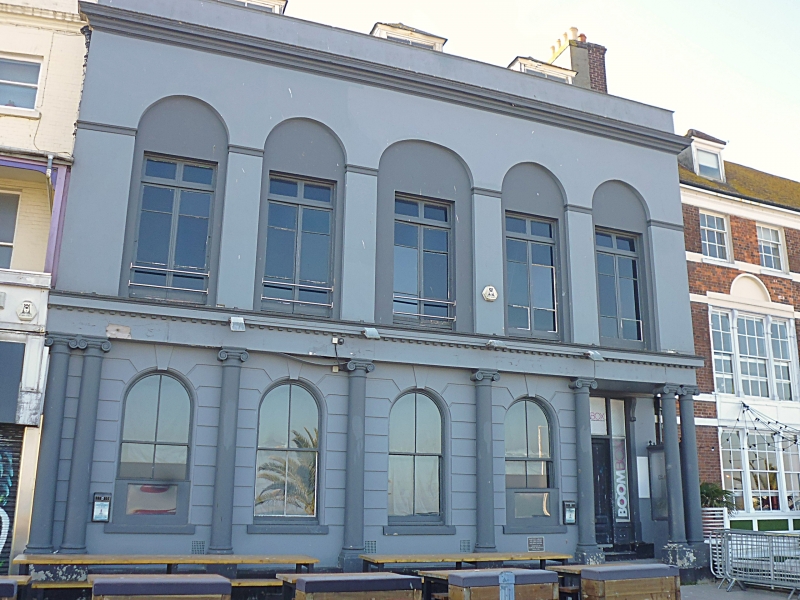 Public house and commercial rooms, formerly Harvey's Library
and Assembly Rooms, and later the Royal Dorset Yacht Club.
Late C18, in use by 1800, modified and extended mid to late
C19. Rendered, slate roof.
PLAN: front block has a one-room ground floor with 2 rooms
over, each with high ceilings; the entrance lobby to the right
has the main stair to its rear. A second range, with a
frontage to New Street, is of the mid to late C19, with a
second staircase, and there is a small square central
courtyard.
EXTERIOR: front range 2 storeys, attic and basement. Three
2-light casement hipped dormers above 5 lofty 2-light
casements with overlight, set in recessed arched panels, the
centre arch wider and to an elliptical head, at the first
floor. RCHME refers to a cast-iron balcony at this level,
which has now disappeared. Ground floor, in 5 bays, has 4
arched 4-pane sashes in channelled rustication, returning to a
narrow arched bay, and with a set-back door to the right, all
under a full-width frieze and dentil cornice, carried on
slender, unfluted Ionic columns, on high bases, without
entasis, and paired at the ends.
Set back on 2+2 steps, to the right, with a tall arched
opening to its right, is a large 3-panel C19 door with
side-lights and deep transom light. Between the column bases
is a stone plinth, with 2 recessed panels, possibly replacing
former basement lights. The blind arcading to the first floor
has a slender necking band, there is a bold full-width stone
moulded cornice, with blocking course and parapet, and end
stacks.
The rear in New Street is rough rendered, in 3 storeys and
basement, with mainly plain sashes, on stone sills. The second
floor has a paired sash, with 4-centred bars in the upper
lights, and a 2-light casement with transom, above 4-pane
sashes with a smaller sash to the centre, and at ground floor

are 2 sashes each side of a panelled door with transom light
on 4 steps, in deep reveals with some incised detail. The
basement is appraoched by a flight of concrete steps, and has
three 16-pane sashes and a door, with a brick retaining wall
to the area. The returns have a raised parapet, and there is a
large brick stack to the left (N).
INTERIOR: detail is mainly of the late C19, but some original
to the first floor, and with some C20 alterations. The inner
lobby has a wide pair of glazed doors, with side lights and
transom light, and a similar pair of doors gives to the main
room to the left. This has a C20 bar, match-board wall lining,
and a heavy fireplace in black veined marble with dumpy
'Doric' columns.
The main stair is in a well with curved outer end, and has a
heavy moulded and swept hardwood handrail on cast-iron
balusters, one to each tread with double vertical and
embellished ends; the open string has scrolled tread ends. The
staircase is lit by a large rectangular lantern with pent top.
In parallel, and further back, is a second and simpler stair,
an elongated dogleg, with stick balusters and Doric newels,
possibly part of the original design.
The first floor main room is in Adamesque detail, with a fine
painted fire surround, including Delft tiles each side of the
grate, and a lofty dentil cornice; the rear of the room has a
large bullseye light facing the small interior court.
In the rear range there are 2 main chambers at the upper
level, each with exposed dark-stained roof timbers of
characteristic late Victorian form, with 2 principal
arch-braced trusses carrying paired secondary trusses at the
hipped ends.
(RCHME: Dorset, South-East: London: 1970-: 340).