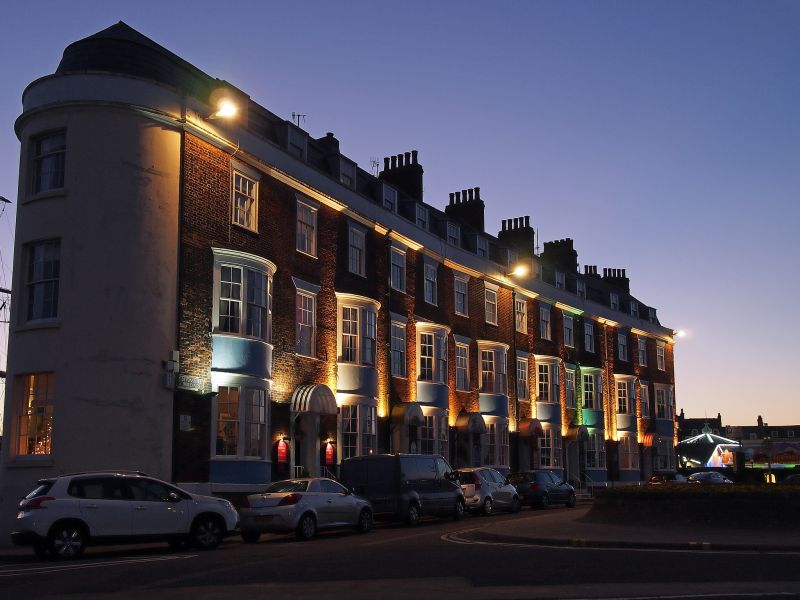 Terrace of 6 houses. c1805-1819 (RCHME). Flemish bond
brickwork, slate mansard roofs. The terrace, at the extreme S
end of the Esplanade, has double-fronted houses at either end,
with singles between, and is finished at the E end with a
full-height rounded bow, said to have replaced the original
house. The rear has been relatively little changed or
rextended, except for No.1, with a 3-storey C20 addition.
EXTERIOR: 3 storeys, attic and basement. 14 flat-roofed
dormers with 6-pane sashes, above 14 nine-pane sashes at
second floor, and 2-storey 8:12:8-pane sash oriels, with a
fine dentil cornice at the top only. The sashes have splayed
painted lintels. A plain plinth to ground-floor level, a
moulded cornice, with rendered blocking course and stone
parapet, plus 6 sashes at first floor. The basements have a
paired sash with central mullion, set back under the oriel.
There are six 6-panel doors under plain fanlights in a brick
arched reveal in 2 orders. A flight of 5 stone steps, some
with nosings, and with a simple wrought-iron rail, rises to
each door. There are paired stacks to the doubled mansard with
central valley to Nos 3-6, and a single stack to No.2, which
is less deep than the remainder, with a single roof.
At the E end the rounded end is rendered, with 12 above 16 and
16-pane sash in plain reveals. The cornice and parapet are
returned to this end. At the W end, adjoining Pulteney
Buildings (qv), there is a one bay return with blind openings,
that to the ground floor being arched.
The back is in brickwork, with 4 small dormers directly above
glazing bar sashes at 3 levels, plus 2 deep stair sashes. At
the E end the building steps back in 2 sections, one of these
with 3 sashes flanked by C20 flat-roofed extensions.
INTERIOR: No.1, The Roundhouse, has a full-height stick
baluster stair, and retains some original cornices.
This is the terrace which starts the great sweep of the
Esplanade running to the N. It has retained most of the
original detail externally, and has not been subject to the
commercial changes which have occurred nearer the centre of
C20 seaside activity. A small number of windows only have lost
glazing bars.
(RCHME: Dorset, South-East: London: 1970-: 353).