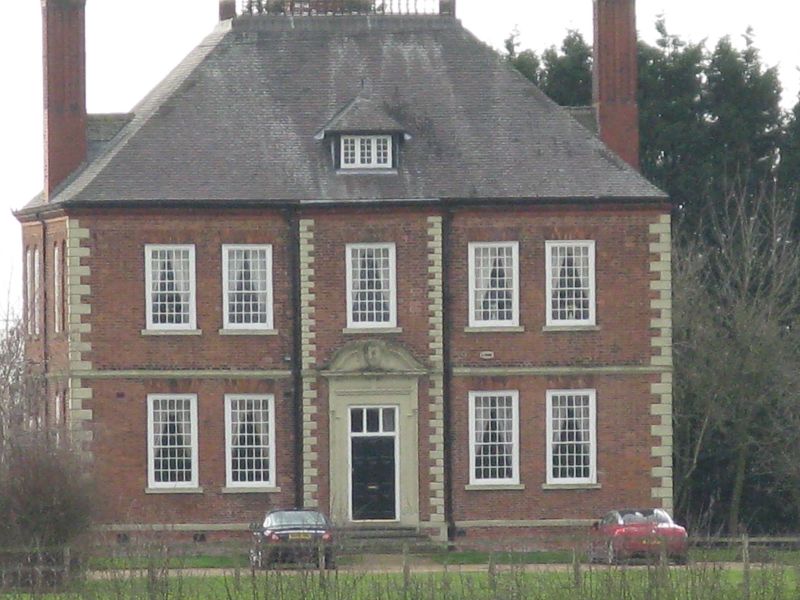 Church of England Parish: Middlewich St Michael and All Angels

WIMBOLDSLEY C.P. (Off) NANTWICH ROAD
SJ 66 SE
8/89 Lea Hall
3.1.67
GV II*
Small Country House, now subdivided into 3 flats. Late C17/Early C18.
Red Flemish bond brick with ashlar dressings and plain tiled roof.
Two storeys, with attic and basement. Entrance front: five bays
symmetrically disposed. Projecting plinth with moulded top.
Chamfered quoins to corners and to slightly projecting central bay.
Cyma-moulded string course between floors and C19 terra-cotta cornice
at eaves level with egg and dart moulding both of which, with the
plinth, continue around the building. The central bay has a painted
ashlar door surround with arched panels and scrolls to the jambs and a
swan's neck pediment above with a crest to the centre and initials J V
to either side. The ground and first floor windows have exposed sash
boxes and are all of 5 x 7 panes those to the ground floor being
slightly taller and all have flat arched heads. The building appears
to have been re-roofed in the C19 from which period dates the
terra-cotta cornice. The tiles, the lateral chimney stacks and the
decorative ironwork around the central flat platform which may
originally have supported a lantern. There is a central C19
three-light dormer window with a hipped roof. Right hand facade:
Quoins to the corners. Two cambered-headed basement windows to right
and left. To the ground floor is a door at right of centre. To the
right of this is a basket-arched window reveal containing a sash
window similar to those on the entrance front. To the left of the
door are three blocked basket-arched window reveals. To the first
floor are four more basket arched reveals. That at right containing a
sash window of 5 x 7 panes and that to left of it containing one of
4 x 3 panes. Left hand facade: Similar to right hand side in having
4 basket arched window reveals to both floors. Those at extreme right
now blocked, those 3 at right now containing windows similar to those
on the entrance front. Rear: to the ground floor are two lateral
C18/C19 one storey extensions with hipped roofs and cambered-headed
windows and with a C19 outshut between. To the first floor are 5
blocked basket arched window reveals, that at the centre being the
widest and lighting the staircase now with a smaller C19 basket arched
cross window of stained glass. C19 chimney stack rising from centre
of wall. Hipped C19 dormer windows to either side.
Interior: Bolection moulded panelling to two ground floor rooms and
one first floor room. The principal staircase is of 2 flights with
open string and moulded tread-ends. The newels are formed of groups
of 8 turned balusters. There is dado panelling of raised and fielded
outline.

The house was built for a member of the Verdin family.