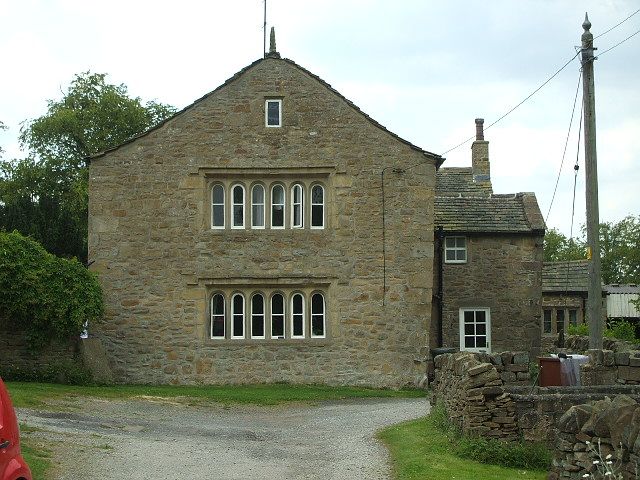 Manor house, probably C16 with C18 alterations and late C19 or early C20 refacing
after fire. Rubble with stone slate roof. What survives is a small house of
2 cells with cross-wing to right, a rear wing to left having been demolished after
the fire. At this time the rear wall was made flush and pebbledashed with large
windows. The north front has quoins. Two storeys. Openings of several forms
and dates, notably at ground floor in centre small twin lancets which may be
nedieval. To left of these is two-storey porch now entered from side, but formerly
through central round-headed doorway with impost blocks and large voussoirs.
Above is a 3-light double chamfered stone mullion window with hoodmould, the inner
chamfer being ovolo. At junction with cross-wing is C19 doorway, with large stair
window over with Gothic glazing. Cross-wing has trace of hoodmould and blocked
window to first floor. Four chimneys. The left gable end, which is surmounted
by a crocketed finial, has to each storey a six-light double chamfered stone mullion
window, each light arched, with hoodmould. Attached to cross-wing is a short
length of garden wall with two beeholes of rectangular form with shelves, all
of stone.
Interior: Now subdivided and much altered. The central room has deeply splayed
beams across the axis of the house but any entry from the porch has been blocked.
The room at left is entered from porch through a chamfered doorway with 2-centred
arched head; it has a ceiling formed of five similar beams notched to form a grid.
There is a small roll-moulded fireplace on the rear wall. The cross-wing has
chamfered beams.
An interesting if fragmentary survival, rare in this area.