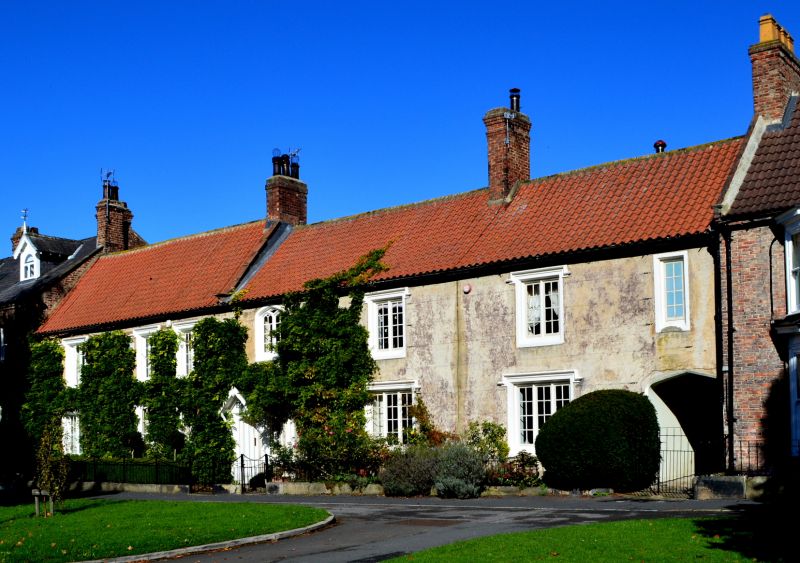 Two houses. No. 7 early C18; No. 8 late C18-early C19; both refronted in mid
C19. Rendered brick and rubble; pantiled roofs, renewed on No. 8; brick
chimney stacks. Tudor style. 2 storeys. No. 7, at left, 3 bays; No. 8 four
bays; slightly irregular. No. 7 also occupies part of the left bay of No. 8
and is entered from a doorway at that point. 2 Tudor-arched doorways, with
added gabled hoods, have small 2-light window between. Coach arch in right
bay of No. 8 has chamfered reveals and Tudor-arched head. Mainly 2- and 3-
light, double-chamfered, stone-mullioned windows, with side-hung 8-pane
casements, in raised surrounds under hoodmoulds; except for two 12-pane
sashes at right of No. 7. No. 7 has dentilled eaves; steeply-pitched roof
with swept eaves, raised right verge and end stacks. No. 8 has steeply-
pitched roof, with slightly lower ridge, and a central stack. 2-storey gabled
wing at right-angles on left rear of No. 7. 2-storey addition with scattered
sashes on rear of No. 8.