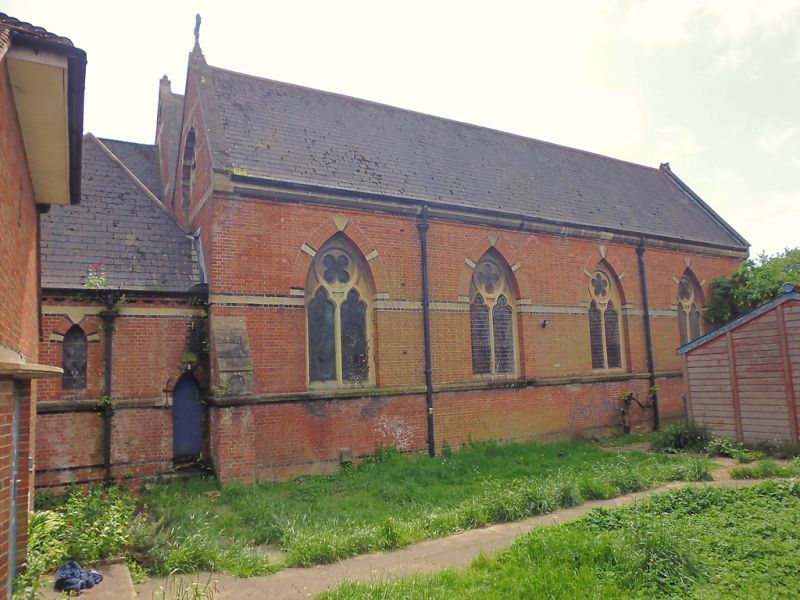 Church. 1863-4, tower built 1866, north aisle 1868, external
pulpit added 1912, two robing rooms for the choir inserted
under the gallery in 1949, one of which became the vicar's
office in 1975.
Designed by a local architect, James Woodman, (builder Mr
Cane), in a style described variously as Lombardo-Gothic,
Early English, or "one where the details are ignorant beyond
belief"; possibly the ecclesiastical-eclectic style.
Red brick with coloured brick in arches to window openings,
Bath stone dressings including string courses and cornices,
asbestos slate roofs, coped verges.
Plan: 4-bay aisled nave, nave extended west with large gallery
over vestry rooms, polygonal apse, north-east organ bay and
south-east vestry with attached external pulpit; entrance via
the base of the tower on south front.
Crenellated 3-stage tower, 2-light bell-openings, arcade of
interlocking arches on south front below clock, pointed arch
openings at ground floor level now closed by glass doors,
2-stage stair turret on west front. The aisles are lit from
the east end by rose windows, as is the west end of the nave.
The flat-roofed external pulpit is built of red brick with
Bath stone dressings and has Ionic pilasters supporting a
cavetto moulded cornice. It is approached by a short flight of
steps with an ashlar wall; studded plank door to pulpit.
Interior rendered. Arch-braced roof to chancel carried on
foliate corbels; scissor-brace to nave; unusual roof
construction to aisles of 2 tiers of curved struts. Foliate
capitals to arcade. Wooden gallery with pierced panels. Organ
with stencilled pipes, 1883 by Harper of Bath; rebuilt 1926
and converted to electricity 1964. The font of Caen stone
supported by columns of Sicilian marble was presented in 1878,
the carved canopy in 1924. Sanctuary panelling, choir stalls
and altar table date from 1924. Carpetted chancel. The pulpit,
according to the church guidebook, originally "projected over
the north edge of the chancel opening" but was replaced in
1934 by a freestanding wooden one. Stained glass by Ward and
Hughes, with one window in the north aisle by Hardman. The
intended spire was never built.
This is the only church in the Brighton and Hove area with an
external pulpit, indicative of the evangelical traditions of
its early days. This also explains the dearth of contemporary
fittings. An interesting church of its type, occupying a
prominent position in an important street.
(Dale A: Brighton Churches: 1989-; Anon: Holy Trinity, Hove; A
Short History: 1976-).