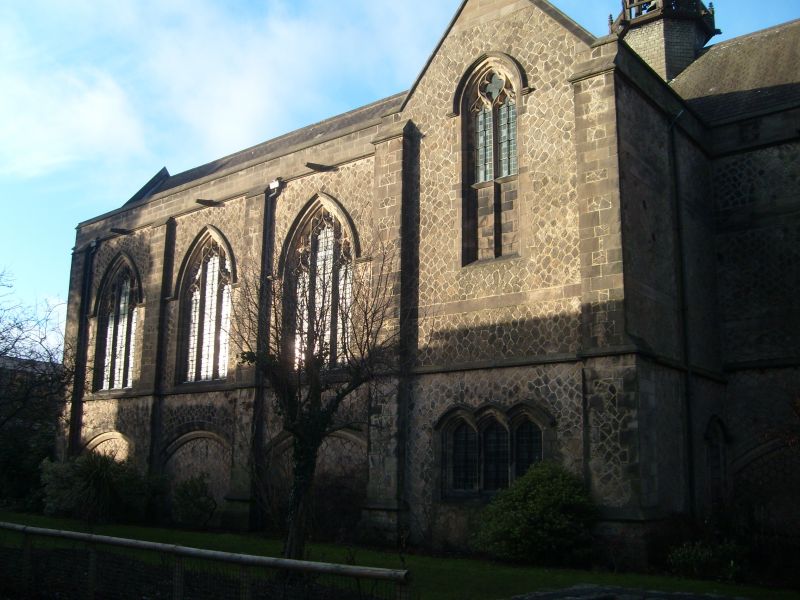 School chapel. 1888. Designed by Paley and Austin. Polygonal
sandstone masonry with bands and dressings of ashlar. Exterior
stone said to be from Lancaster and interior to be from
Stourton in Cheshire. Westmorland slate roof. Gothic Revival
style.
Nave and chancel under a continuous roof, a south aisle under
a pitched roof with a transeptal vestry and organ chamber at
the east end, and a north-west porch. The external walls have
an unusual treatment, with the bays being separated by
buttresses, between which span double-chamfered segmental
arches at a lower level with blind walling below and with
pointed traceried windows above.
The south aisle is of 3 bays with 3-light windows, with a 4th
gabled transept bay to the east which has a mullioned window
of 3 pointed lights at the lower level and a traceried cross
window, the lower part blind, above. The east wall of the
transept and the south wall of the chancel are blind. The west
window of the aisle is of one light, and to the west of the
aisle the nave has a 2-light window. The east chancel window
is of 6 lights, as is the west window of the nave. On the
north side the east chancel bay is blind and the 2nd bay has a
4-light window with reticulated tracery. Between nave and
chancel is a projecting stair turret, with a doorway across
its north-west angle, originally used to admit members of the
public.
The north wall of the nave has windows of 2, 3, 3 and 3
lights. The north porch has a gable of shallow pitch, a
moulded pointed outer doorway, and a similar inner doorway
with a fleuron order. To the west are 3 bays of an arcaded
covered way which now links the chapel with a C20 classroom
block. At the junction between nave and chancel is a tall
octagonal fleche with weather vane and an open timber bell
stage which has carved oak tracery decoration and a balcony.
The original bell was said to have belonged to the Parish
Church peal.
INTERIOR: the 3-bay arcade to the south aisle has moulded
pointed arches springing from piers which are each of 6
clustered shafts with moulded capitals and bases. The chancel
archway is continuously moulded in 3 orders with deep hollows.
The windows have 2-centred rear-arches, and a wall passage at
sill level on the north side of the nave and chancel and in
the south wall of the aisle. In the east bays of the chancel
it is expressed as 3-bay arcades with trefoiled heads. The
north transept contains a vestry at the lower level, with an
organ above within arched openings to both aisle and chancel.
Nave has open timber roof with elaborate arch-braced trusses
and false hammerbeam trusses. Chancel has a 2-bay
quadripartite stone vault, the outer corners carried on
concave octagonal shafts rising from floriated corbels.
The lower parts of nave walls have oak panelling with tracery
decoration, and near the west end the nave is divided by a
solid oak screen with central opening. The choir stalls are of
6 bays on each side and have elaborately carved and crocketed
semi-octagonal canopies projecting forward from buttressed
shafts under a flat top with lettered balustrade. The pulpit
is of oak on a sandstone base and the pews are of oak.
HISTORY: Chapel built originally for Ripley Hospital, an
orphanage, later converted to Ripley St Thomas School (qv).
(Cross Fleury (pseud.): Time-Honoured Lancaster: Lancaster:
1891-: 397).