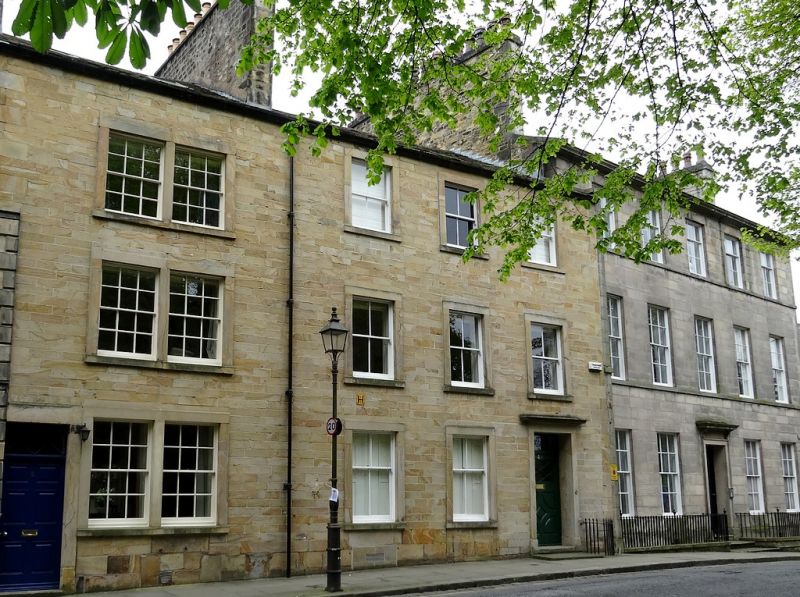 House. Late C18, altered C19. Sandstone ashlar with ashlar
dressings. Stone slate roof with a prominent gable chimney
stack on the left and with a stack to the right shared with
No.2 (qv). Double-depth plan with a rear wing on the right.
3 storeys above a cellar and 3 bays. The windows have plain
raised surrounds and 4-pane sashes, except for the central one
on the second floor, which is blind and has 12 fixed panes.
The heads of the other second-floor windows appear to have
been raised and the lower parts of the surrounds infilled. The
doorway, in the right-hand bay, has a plain raised surround
under a moulded cornice. Original doorway to central bay has
an integral rectangular overlight with glazing bars arranged
in a diamond pattern above a square panel, subdivided with
framing to form a concave-sided hollow diamond. To the right
of the door are railings with cast-iron arrow-head balusters.
INTERIOR: most doorways have reeded architraves. At the rear
of the entrance hall is a 3-bay arcade, with square pilasters
carrying semi-elliptical arches. From the centre of this
arcade rises the dogleg staircase, which has an open string
and stick balusters. The ground-floor front room has shutters
at the windows and a triple alcove with semi-elliptical
arches.