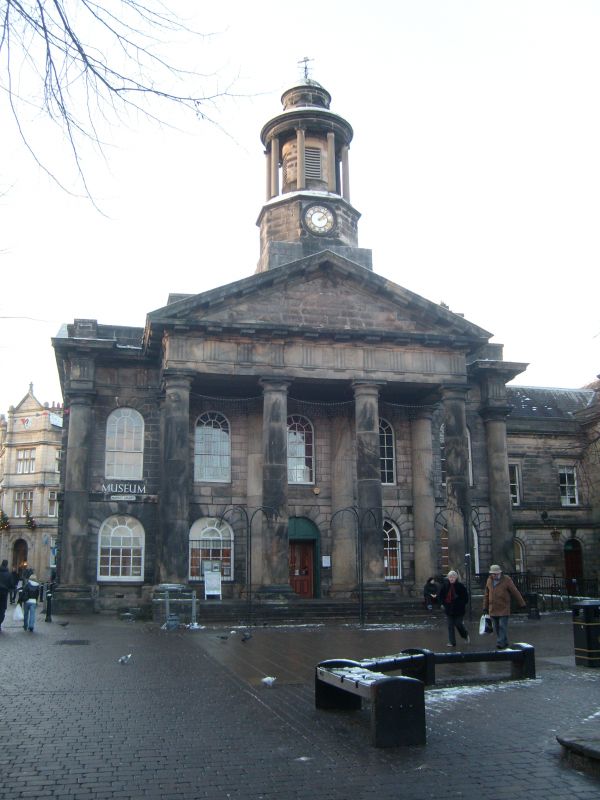 Town hall, now museum. 1781-83. To a design by Major Jarrett,
with cupola designed 1782 by Thomas Harrison. Contractors
Robert Charnley (mason) and Robert Dickinson (carpenter).
Extensions in 1871 and 1886, and alterations in 1873, by Paley
and Austin. The transfer to the new Town Hall in Dalton Square
(qv) was completed in 1910 and the building was opened as a
museum in 1923. Sandstone ashlar with slate roof. 2 storeys
above a basement.
The principal facade, facing east, is of 5 bays separated by
engaged giant Tuscan columns and has a rusticated ground
floor, a triglyph frieze, round-arched windows with glazing
bars (those on the ground floor replacing an open arcade), and
a central round-arched doorway. A projecting, giant tetrastyle
Tuscan portico is raised on 4 steps. Above its pediment the
cupola is visible, of square plan at the base, octagonal above
with a clock face, and with a rotunda of unfluted Ionic
columns. Above is a drum decorated with swags, and a dome. In
front of the right-hand bay steps lead down to a cellar
doorway.
Adjoining to the right are 2 lower bays under a cornice and
parapet, rusticated on the ground floor with a round-arched
window and door. These form a link to the later Public Library
(qv) and were added in 1886 as part of an extension for the
Board of Health and Police. The south wall of the original
building is of 3 bays under a pediment and has round-arched
windows. The left-hand ground-floor opening now contains a
later C19 stone door surround.
The west facade to New Street is of 5 bays. The ground-floor
openings have been filled in except for the 2nd and 4th bays,
which contain lunette windows. In the centre is a stone porch
added in 1873, supported on paired Tuscan columns.
Adjoining to the left is the wing added in 1871, which has a
rusticated ground floor with round-arched openings, and
1st-floor windows which have alternating triangular and
segmental pediments. Behind a cornice and parapet is a hipped
slate roof. The wing projects forwards and has 3 bays facing
south and 4 bays facing west onto New Street. There are
doorways in the 1st and 3rd New Street bays, and an additional
window between the 2nd and 3rd bays.
INTERIOR: at basement level, barrel-vaulted cellars,
originally entered by steps to each side of the portico, but
with only the northern flight now surviving. The remains of a
wall with the bases of mullioned windows of C17 type are said
to be visible within a crawl-way which leads under the 1886
wing to link with the Public Library at cellar level.
The ground floor was originally open and served as a grain and
butter market. The front part is now divided into a hall and 2
rooms, but 3 of the original 4 Tuscan columns, parallel with
the front wall and supporting the upper floor, survive.
Towards the rear the present stone staircase with an iron
balustrade dates from 1873: originally there was a central
staircase against the rear wall, flanked by lock-ups. The
first floor of the original building was altered in 1873, when
the old Court Room and Council Chamber were combined into one
room. 3 gasoliers remain in the ceiling. In the north wall are
2 adjacent chimneypieces by Gillow, probably moved to their
present positions during the alterations. On the 1st floor of
the 1871 rear wing is the New Court Room, which also has
gasoliers remaining in the ceiling.
Until 1969 Barclay's Bank occupied Room 1, at the south end of
the ground floor. The rear wing, facing New Street, was
occupied by the National Westminster Bank until 1977.
Building adjoining Old Town Hall listed on 18.2.70.