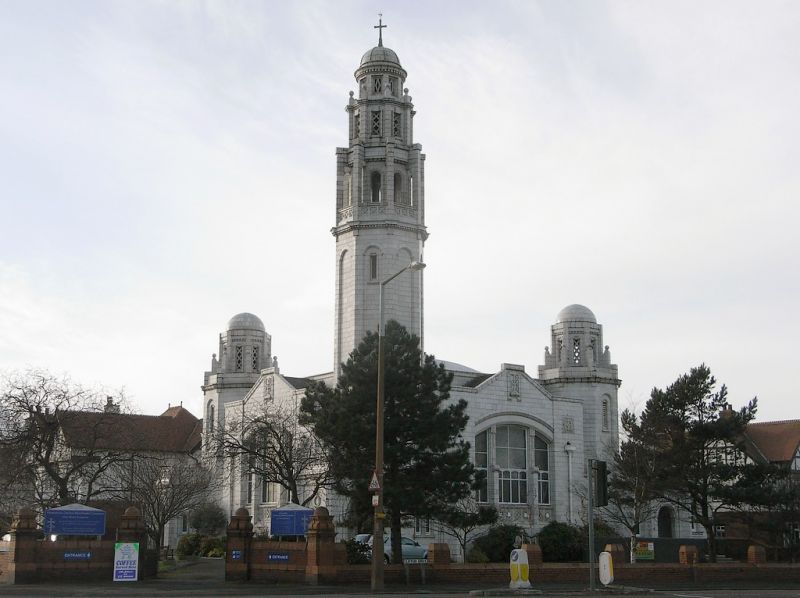 GV
II*
Also known as "the White Church". Congregational church, now united Reformed church. 1904 and 1911, by Briggs, Wolstenholme and Thornley; with stained glass by Luke S. Walmesley of St Annes and Charles Elliott of London. Mostly white faience, but hall to rear of red brick with buff terracotta dressings; slate and bituminous asphalt roofs.Free Byzantine style. The principal element is a square vessel with a domed roof, a tall octagonal minaret tower at the north-east corner and octagonal turrets with domed lanterns at the south-east and north-west corners. Each of these 3 corners has an extruded 3-sided porch with pilasters, dentilled cornice and geometrical panelled parapet, and a round-headed doorway in the centre bay; the roof of the main porch, at the north-east corner, has swept and scrolled brackets to the corners of the tower, which has tall round-headed panels in the sides, a dentilled cornice, and a 3-stage lantern or belfry, the 1st stage open-arcaded, the 2nd with latticed windows, and the top with a domed roof surmounted by a cross. The 2 principal sides are filled with wide projected gabled bays which have large segmental-headed tripartite windows, and parapets; and attached to the west side of the north-west porch is an octagonal parlour with round-headed windows and a domed roof. Attached at the rear is a hall of red brick, on a parallel axis, the east gable having a Diocletian window with run-out vousoirs of buff terracotta.

INTERIOR: square main vessel with chamfered corners (porches in 2 corners, choir vestry and organ chamber in the others) and in each side a wide segmental-arched alcove illuminated by stained glass windows illustrating biblical scenes, a large number of historical religious figures, and events such as the departure of the Pilgrim fathers and the Great Ejection of Nonconformist clergy.

The item is an unusual design and forms a very conspicuous and well-known landmark between Lytham and St Annes.