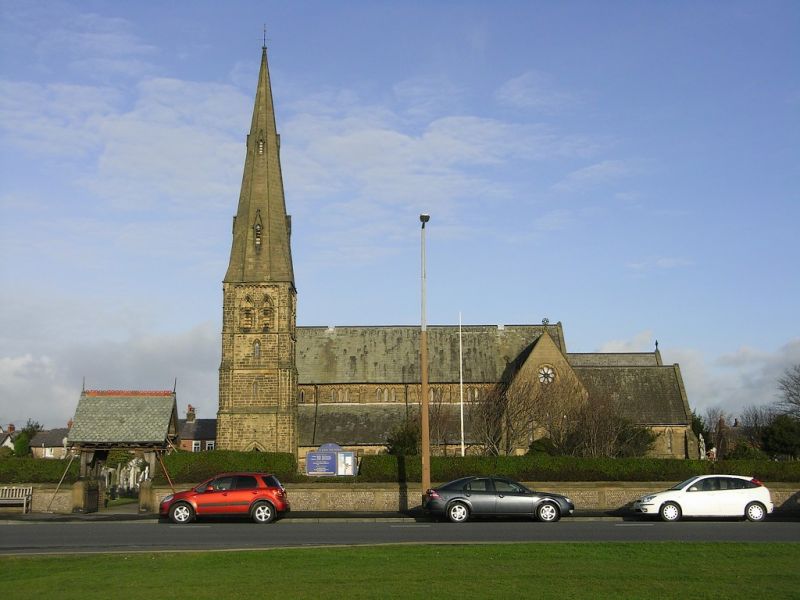 Church. 1848-9, by E.H.Shellard and among his best works;
transepts added and chancel extended 1856-7 by the same
architect; altered. Sandstone ashlar with Cumberland slate
roof.
Early English style.
Narrow nave with wide north and south aisles, south-west
steeple attached to south aisle, north and south transepts,
chancel with south chapel and north vestry.
The 4-stage tower, with clasping corner pilasters, a weathered
band over the 1st stage, string-courses to the upper stages
and a corbel table to the belfry, has a 2-centred arched
doorway with set-in shafts and a hoodmould with figured stops
(king to left, bishop to right), and double doors with
ornamental scrolled strap hinges; very small lancets to the
2nd and 3rd stages; 2 louvred lancet belfry windows; and a
broach spire with lucarnes on 2 levels.
The aisles have low buttressed side walls, sillbands and
coupled lancet windows with linked hoodmoulds; the nave has a
buttressed west end with 2 tall lancet windows, and a
pilastered clerestory with small triple-lancets; the transepts
have angle buttresses, 3 very narrow lancets and a circular
window above (wheel in south, multifoil in north); the south
chapel (formerly the choir vestry) has a war memorial plaque
in place of a former south doorway, and lancet windows of 1, 3
and 1 lights; and the chancel has an east window of 3 stepped
lancets with a sillband and linked hoodmoulds.
INTERIOR: 6-bay aisle arcades of double-chamfered 2-centred
arches on short cylindrical piers with moulded annular caps
which include a dog-tooth band; roof of arch-braced collar
trusses with wallposts rising from wall-shafts on figured
corbels; similar roof to chancel, with curved windbraces to
the purlins; former chancel screen removed to form baptistery
at west end of north transept; box pews - quite unusual for
the date - many with original doors and painted numbers (2 at
the rear of each aisle lettered "FREE"), and brass umbrella
brackets; stone Gothic-style War Memorial dado in south chapel
(with plaque recording that it was dedicated by William
Temple, Bishop of Manchester, in 1921, the second year of his
episcopacy).
HISTORY: site donated by Clifton family of Lytham Hall (q.v.),
church built by public subscription.