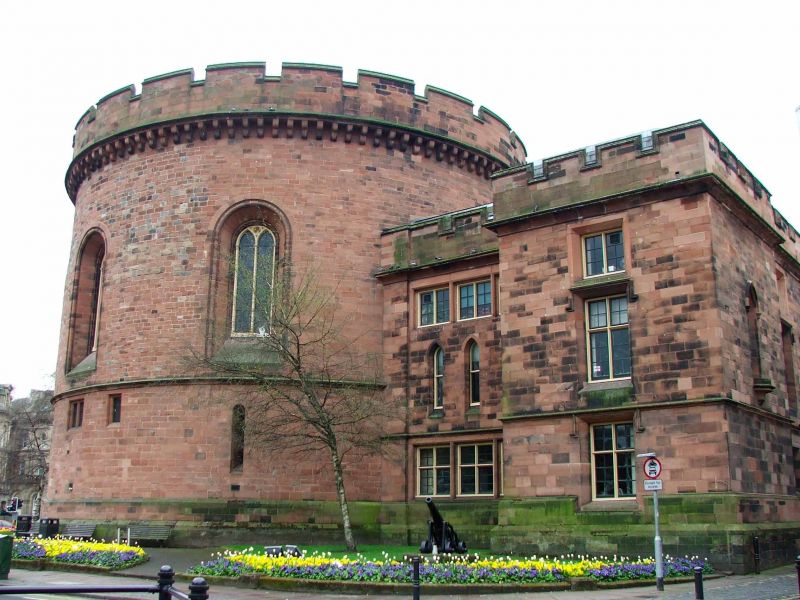 Formerly known as: The Citadel.
Citadel, then Court House and Court Offices, now County
Council Offices. 1542 by Stephen von Haschenperg with 1809-12
alterations and additions, by Thomas Telford and Sir Robert
Smirke. Red sandstone ashlar on chamfered plinth with string
courses, machicolated cornice (in part) and battlemented
parapets. C20 greenslate roof on offices without chimneys and
hipped lead roof on tower.
Tower was formerly the Nisi Prius Court and is oval, the core
being the former Citadel east tower, heightened and refaced in
C19; clasping NW side is a 2-storey (internally 3 storeys)
office block of 6 bays, with mock gate projection into English
Street; all in Gothic style. The tower has tall 2-light
windows in rounded deeply-recessed chamfered archs, over small
lancets and 2-light openings.
Office block has left double plank doors in pointed Gothic
arch; similar off-centre doorway projects in a battlemented
porch, now fitted with a casement window. Ground floor 2-, 3-
and 4-light stone mullioned windows above with central trefoil
heads in pointed arches.
Gate projection is basically an elongated passageway to the
court; ends in 2 octagonal turrets flanking central arch under
a cross vent; the side walls have been pierced by 2 pointed
arches created in 1929 (formerly the pavement went round the
turrets). Left return has windows similar to the main facade
(some are C20) and blind statue niches. Rear has some C20
windows inserted.
INTERIOR of tower retains its galleried semicircular court
seating and judges bench (ceased to be used 1971). Ceiling
replica replaced in 1980s renovation; much external stonework
was replaced in same restoration. Office block interior
extensively altered. For further details see references on
Crown Court description.