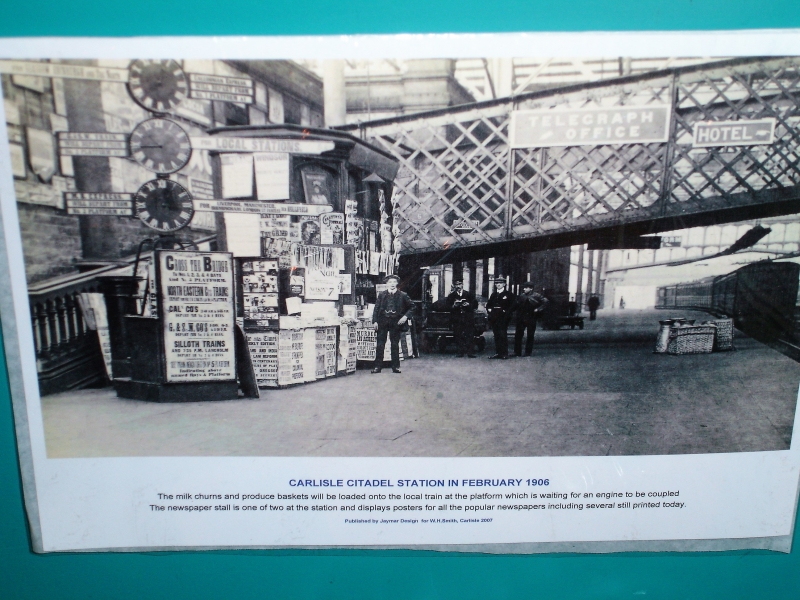 Railway station. 1847-8 for a Joint Station Committee, by Sir
William Tite; extended 1879-80. Calciferous sandstone ashlar
on chamfered plinth with stepped buttresses, eaves cornice and
solid parapets. Graduated greenslate roofs with coped gables;
some skylights and gabled roof dormers; ashlar ridge and end
chimney stacks. Glazed overall roof behind the main facade
covering the running lines. Tudor Style.
Main facade is of 2 storeys, numerous bays in a long
continuous row of differing roof levels. Central port-cochere
of 5 bays, each pointed arch divided by a buttress carried up
as a finial. Over each arch are coats-of-arms; central Royal
arms flanked by those of Lancaster & Carlisle Railway and
Caledonian Railway, remaining panels intended for Maryport &
Carlisle Railway and Newcastle & Carlisle Railway left blank.
Over, and in the offices to the right, are mullioned and
transomed windows mostly of 3-lights. Between the entrance and
offices is a clock tower which is octagonal on a square base.
The single-storey former waiting and refreshment rooms (at the
left) have a series of facing gabled projections with various
mullioned and canted bay windows.
Under the glazed roof, which is supported on a series of
hooped trusses, is a central footbridge of crossed girders
linking with the island platforms. The island buildings are
also of 2 storeys, numerous bays in a continuous row; doorways
and windows in restrained Tudor style.
INTERIOR: Numerous stone fireplaces in Tudor style, some in
former refreshment rooms are inscribed and dated, see Bonavia
(1987), for an illustration of one. For further details and
removal of part of roof in 1957-8, see Robinson (1986).
Detached wall for demolished roof is listed separately.
The building by Tite is among the most important early major
railway stations in Britain.
(Bonavia MR: Historic Railway Sites in Britain: 1987-: P.139;
Robinson PW: Rail Centres, Carlisle: 1986-).