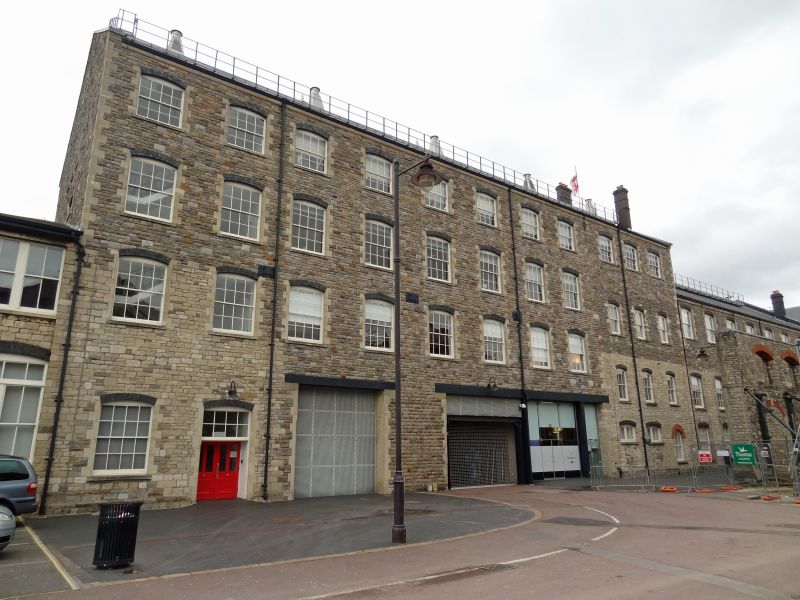 Chief Mechanical Engineer's and Drawing Office, now Works Manager's
office and associated offices. 1840's, 1870's and 1903-8. Part
ashlar, mostly coursed rubble with ashlar dressings. Later
corrugated metal roofs. 3-storey, 15 x 3 window bays. The west
wing, lying north-south, is the original building, the office of
Sir Daniel Gooch being on the first floor, north end, where the
original drawing office survives. This structure retains some
ashlar work and one Venetian window, originally a doorway, at the
south end. The next wing, lying east-west, was added in the 1870's
at which time the west wing was also reconstructed. The top storey
was added in 1903 (authorised 1st Nov. 1903) the construction
perhaps not being completed until 1908. Sash windows with glazing
bars in arched head to ground floor, square headed above. Some
have been altered. Above the entrance doorway at second floor
level are 2 carved reliefs broad gauge locomotives, perhaps Firefly
Class, and relocated from the original broad gauge engine shed of
1843, and were relocated here in 1903-8.
Internally, the public spaces retain the character of a late
Victorian office with wooden and glazed screens and 2 good iron
staircases with hardwood tread inlay. On the first floor, the east
end consists of a private offices, now the Production Manager's
office and a larger outer office divided into two in the 1950's for
Secretary and Works Manager's office, the latter with decor typical
of that period. All pargetting is still intact where concealed, as
is the fireplace. Most of the windows are double glazed with
standard sashes, a very rare example of Victorian noise insulation.
The top floor drawing office is roofed using rolled bridge rails,
an attractive feature. The whole building is archaeologically and
historically most interesting, the nerve centre of the GWR works,
used by Gooch, Armstrong, Dean, Churchward etc., and where the
Castles, Kings, Warships and other important classes, both steam
and diesel, were designed. The building demonstrates the 3 main
periods of the historical development of the works and is one of an
important group of Victorian industrial buildings at the GWR works.