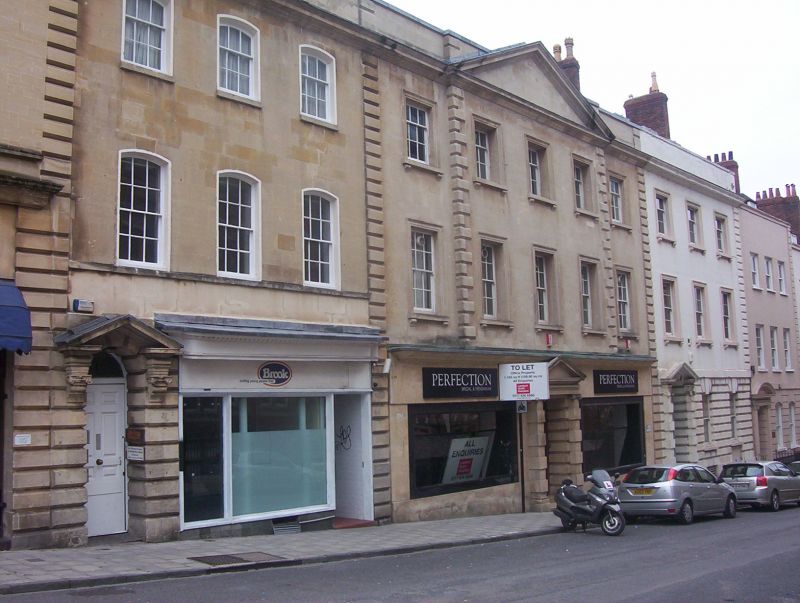 Terrace of 3 houses, now offices. c1742. Possibly by James
Paty the Elder. Limestone ashlar with brick party wall stacks
and a pantile hipped roof. Double-depth plan. Palladian, mid
Georgian style.
Symmetrically-planned group each of 3 storeys, attic and
basement; 5-window middle and 3-window outer ranges.
Rusticated pilaster strips to party walls, cornice and
parapet, and a rusticated ground floor to a plat band.
The middle house is 1:3:1, with the rusticated quoins to a
pedimented centre broken forward; a central doorway with
blocked Ionic pilasters to a pulvinated frieze and pediment,
rectangular overlight and 8-panel door. Outer houses have
left-hand semicircular-arched doorways, with similar surrounds
to the centre, fanlight and 6-panel doors. C20 plate-glass
shop fronts; architraves with sill blocks to Nos 2 & 3, plain,
segmental-arched heads to No.1, to 6/6-pane sashes and
3/6-pane second floor sashes; 2 hipped dormers. The rear
elevation to No.4 has an early C19 addition of 6 Doric columns
to an entablature with metopes.
INTERIOR: No.1, entrance hall with a panelled division from
front room, a semicircular arch with panelled reveals to a
side dogleg stair with column-on-vase balusters, a moulded
ramped rail and panelled wainscot; 6-panel doors and panelled
shutters; fireplaces and panelled shutters.
HISTORICAL NOTE: named after the reconciliation between George
II and Frederick, Prince of Wales.
Probably the earliest of a group including Nos 5-9 (qv), the
early Palladian facades setting a trend which remained
influential into the C19.
(Gomme A, Jenner M and Little B: Bristol, An Architectural
History: Bristol: 1979-: 210).