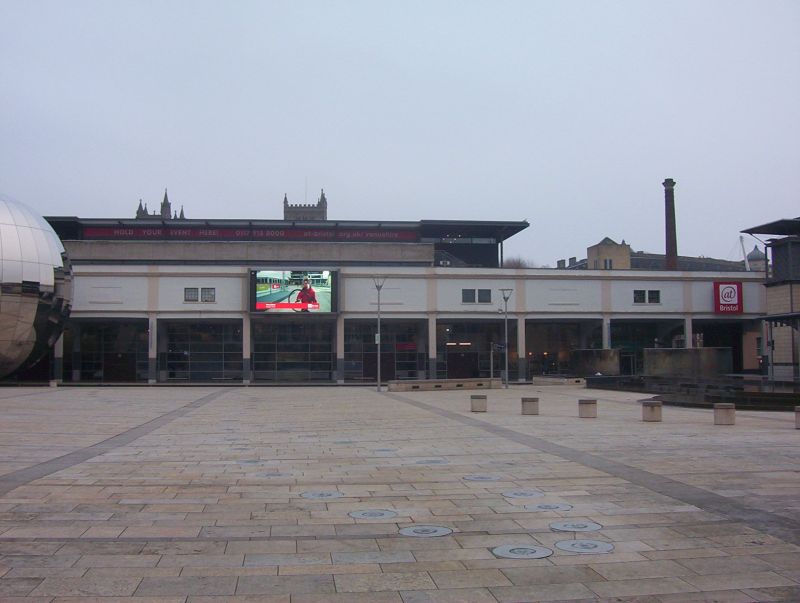 Railway goods shed. 1906. Architectural assistant PE
Culverhouse. Engineer W Armstrong. For the Great Western
Railway. Reinforced concrete on the Hennebique system, built
by Robinson of Bristol for the Great Western Railway, a
pioneer in the early use of this system; partially clad in
render and blue engineering bricks, roof not visible. Open
plan.
2 storeys, 10 bays long and 4 wide. Ground-floor station open
to the S side, with warehouse above. S elevation has square
stanchions to a cornice, beneath pilasters to a second-floor
cornice, with blind panels alternating with metal-framed
windows with glazing bars. The N side has a ground floor of
black brick piers to segmental arches with 6-light mullion and
transom windows. At the E end the attached 2-storey, 3-window
range office block has a blue brick plinth, plat band and
cornice, brick segmental-arched head dressings to a central
doorway, blind windows to the right, and 5-window side
elevations.
INTERIOR: stanchions support 2 wide, parabolic arches spanning
the centre bays, with half arches to side aisles.
HISTORICAL NOTE: built by the GWR to terminate the line into
the docks from the west, and has a significant place in the
development of Canon's Marsh, for much of the C19 an
industrial backwater. It occupies a very early and significant
place in the introduction of reinforced concrete systems into
Britain. The drawings (dated variously 1904) are marked from
the office of LG Mouchel and quote the Hennebique patent for
ferro-concrete construction. W Armstrong was the engineer
responsible for new works on the Great Western Railway, which
played a pioneering role in the introduction of this method of
construction.
(Great Western Magazine: 1906-).