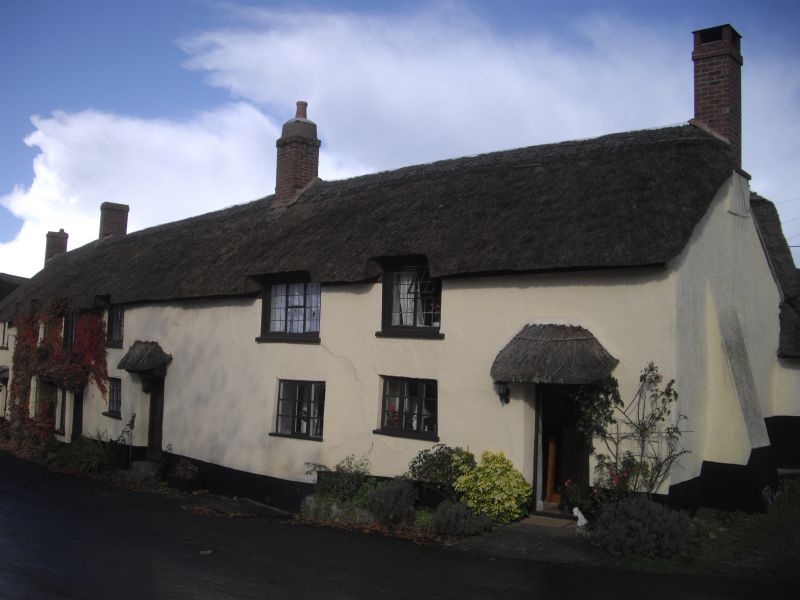 2 adjoining estate cottages, probably originally one house, in a row of 4 cottages.
Circa late C16/early C17, possibly a remodelling of an earlier, late medieval house.
Creamwashed and rendered, probably cob and stone rubble; thatched roof with a plain
ridge, gabled at the right end; axial stack with a brick shaft.
Plan: Overall L plan: a single depth range facing south with a single-storey rear
wing at right angles. The main range is a 3 room and through passage plan, Elm View
(to te left) consisting of the lower end, passage and the hall (stack backing onto
passage), Popes (to the right), the inner room. Rear lean-to probably a later
addition. The core of the building may be late medieval (like Virginia and Newcott,
q.v., adjoining at the left), although the roof timbers seen on survey (1987)
appeared to be later.
Exterior: 2 storeys. Asymmetrical 2:1 window front, the eaves thatch eyebrowed over
the 3 first floor windows. Elm View, to the left, is double-fronted with a C19 or
C20 plank front door with a thatched porch hood to the through passage. C20 timber
first floor casements with C20 square leaded panes. Popes, to the right, has a C19
or C20 plank front door to the right with thatched porch hood, 3-light C20 timber
casement to the left, first floor 2-light casement with C20 square leaded panes.
Interior: Elm View only inspected. The right hand room (the hall) has a chamfered
axial beam; the fireplace has been reduced in size but the old lintel survives. The
right end partition is a plank and muntin screen with the remains of a blocked
doorframe into Popes. the stair rises from the through passage, parallel with the
rear wall of the lower end.
Roof: Apex not inspected. Visible timbers on the first floor are straight principal
rafters, but these probably date from the enlargement of the first floor windows and
an earlier, possibly medieval roof structure may survive above.
In the centre of an outstanding estate village characterized by thatched buildings,
several of which have medieval origins.