A Grade I Listed Building in Clifton, Bristol 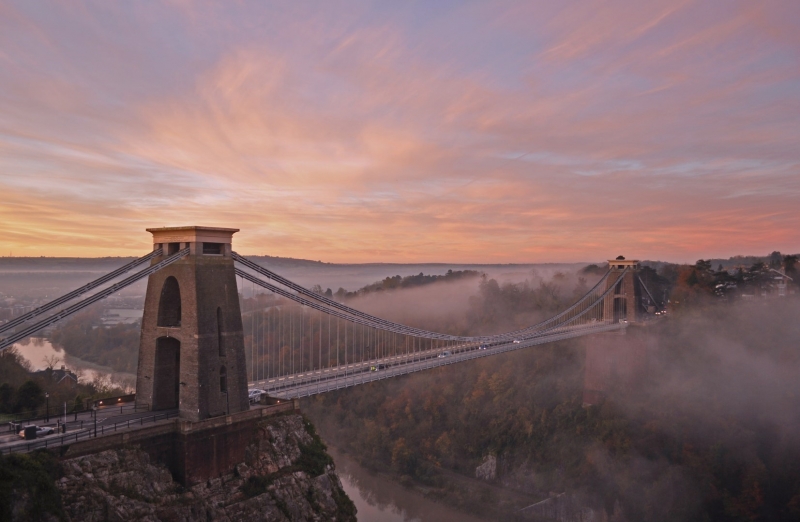 DESCRIPTION
Clifton Suspension Bridge is supported on two large abutments, on the Clifton (east) and Leigh Woods (west) sides of the Avon Gorge. The abutments are faced with red sandstone ashlar, the west abutment being built into the sloping bank and the smaller east abutment founded on the St Vincent’s Rocks cliff top. The west abutment contains 12 vaulted rubble-stone chambers over two tiers, each chamber around 11m high, linked by narrow shafts and tunnels. The bridge towers, each square in plan, are supported by the abutments; the east tower is one metre taller than the west at 27.1m. The towers are constructed of Pennant sandstone rubble, with ashlar caps and cornices and limestone dressings. Each is battered on the north and south sides up to the segmental arch above the roadway, but differ in that the east tower has narrow pointed-arch openings on these elevations. Above the segmental arch a parabolic arch rises to below the land chains. The tower caps have deep coved cornices; the cap of the west tower carries the Latin inscription SUSPENSA VIX VIA FIT (‘a suspended way made with difficulty’), and the east tower cap has the inscription COMMENCED 1836 / ISAMBARD KINGDOM BRUNEL F.R.S. ENGINEER / COMPLETED 1864 / JOHN HAWKSHAW F.R.S. WILLIAM HENRY BARLOW F.R.S. ENGINEERS/ COCHRANE GROVE & CO CONTRACTORS. Each cap contains two cast-iron saddles to which the chains are attached, mounted on rollers to provide flexibility of movement between the land and central span chains. The land chains are anchored into the ground on either side of the Gorge across corresponding land saddles. The triple chains connect to and support the deck with 162 suspension rods, each 2.4m apart and varying in length. The six chains comprise 4,200 links across the entire span of the bridge between the anchorages. The anchorages enter an inclined tunnel at each end, locked by iron wedges behind cast iron anchor plates, bolted to the rock. The deck is constructed of iron; longitudinal girders are connected to the chains by suspension rods, with cross girders with diagonal ties. The parallel footway parapets are on the outside of the main structure, and have wrought iron lattice girders which provide additional rigidity. The road itself is of Douglas fir sleepers, covered with planking and asphalt. The span between the towers is 214m (412m between the anchorages) and rises 74.7m above high water, as Brunel intended. Recent analysis of the structure has proved that Brunel’s design is close to the ideal.

The base of each tower is surrounded by 1.2m-high coped, coursed rubble sandstone parapet walls with ashlar piers. The walls extend beyond the west tower along the roadway for approximately 46m on the north side and 91m on the south.

At the west end of the bridge the road is flanked by two single-storey toll houses, located at the end of the land chains. The battered walls are constructed of coursed rubble sandstone with a sandstone ashlar plinth, quoins and dressings, with a flat roof with an overhanging moulded sandstone ashlar cornice. Inner elevations have a single attached sandstone pier. Each tollhouse has a single door on the west elevation, and a window on the outer elevations, set in deep flat-section moulded architraves.

Pursuant to s1 (5A) of the Planning (Listed Buildings and Conservation Areas) Act 1990 (‘the Act’) it is declared that the two east tollhouses are not of special architectural or historic interest.

On his death in 1753, Bristol alderman and wine merchant William Vick left £1,000 to the Society of Merchant Venturers to fund the construction of a toll-free stone bridge across the Avon Gorge between Clifton Down and Leigh Woods. Although left to gather investment, by 1829 it was clear that the money raised was not enough to fulfil Vick’s vision. An iron suspension bridge with a toll income was preferred and a competition launched. The competition attracted 22 entries, including four from the 23-year-old Isambard Kingdom Brunel. The final four entries – one of which was Brunel’s – were judged by Thomas Telford. Telford rejected them all, mainly over questions of wind stability, and instead designed his own stone, three-span Gothic bridge; this failed to attract funding.

An Act of Parliament was passed in May 1830 to construct a tolled suspension bridge, and a second competition launched. Twelve engineers submitted entries, again with Brunel submitting four ideas. Five schemes were shortlisted, including one by Brunel, and the others by Telford, Capt. Samuel Brown and James Meadows Rendel (both had also entered the 1829 competition) and William Hawkes of the Eagle Foundry in Birmingham. The judges, Davies Gilbert MP and John Seaward, a civil engineer, preferred Hawkes’ design, and Brunel was placed second. However, he made some alterations and convinced the judges that his design was the only one to satisfy the weight considerations outlined in the brief. On 16 March 1831 Brunel was appointed engineer, and estimated the cost at £57,000 to include detailing in the then-fashionable Egyptian style. The 214m-long span was to be 74.7m above high water, suspended by a pair of double chains. He described the project in his journal as ‘my first child, my darling’. The foundation stone on the Clifton (east) side was laid on 21 June 1831, but little further progress made before work was stalled by the Bristol Riots at the end of October 1831.

Construction recommenced on 27 August 1836 with the laying of the Leigh Woods (west) abutment foundation stone. In 1840 the chain manufacture contract with Copperhouse Foundry, Hayle was signed. The towers, abutments and four anchor tunnels were completed by 1842, but by early 1843 funds ran out, with around £30,000 required for much of the remaining ironwork construction. In October 1851 Brunel was ordered to suspend work and sell the materials and plant to pay the creditors. As such the chains were sold, and used in Brunel’s Royal Albert Bridge, Saltash, Cornwall (1847-59; Grade I listed). Work was completely abandoned in July 1853, by which time the time limit for construction of the bridge as stipulated in the 1830 Act had elapsed. Brunel died in September 1859.

In 1860, as a memorial to Brunel, the Institute of Civil Engineers formed a company to complete the bridge, with Sir John Hawkshaw and William Henry Barlow appointed as engineers. The chains from Brunel’s Hungerford Suspension Bridge, completed in 1845 and demolished in 1860 for the Charing Cross Railway, were purchased and re-used at Clifton. Hawkshaw and Barlow’s changes to Brunel’s design included the addition of a chain on each side of the bridge; new anchor tunnels; reduced use of timber on the deck; and rejection of the Egyptian theme, which would have seen the towers clad in cast-iron decorative panels with sphinxes on top. Work continued, until the bridge was finally opened in 8 December 1864 by the Lords Lieutenant of Gloucestershire and Somerset.

Changes were made to some of the ironwork and the decking into the C20. In 2002 an inspection revealed that, despite appearing to be of solid sandstone construction, the Leigh Woods abutment contains 12 vaulted chambers in two tiers, linked by shafts and tunnels.

The asset was previously listed twice also at List Entry 1129844.

Clifton Suspension Bridge, designed in 1829-31 by IK Brunel, and completed in 1860-4 by Sir John Hawkshaw and William Henry Barlow, is listed at Grade I for the following principal reasons:

Architectural interest:
*a remarkable engineering feat, spanning the Avon Gorge over 214m, and 75m above high water using the suspension method;
*reuse of chains from Brunel’s Hungerford Bridge, demolished in 1860;
*substantially intact with little engineering intervention, despite increased traffic load;
*as a major landmark and icon within the Avon Gorge and Bristol’s urban landscape.

Historic interest:
*the major Bristol work of Isambard Kingdom Brunel;
*completed after Brunel’s death as a memorial to him.