A Grade I Listed Building in Bridgwater, Somerset 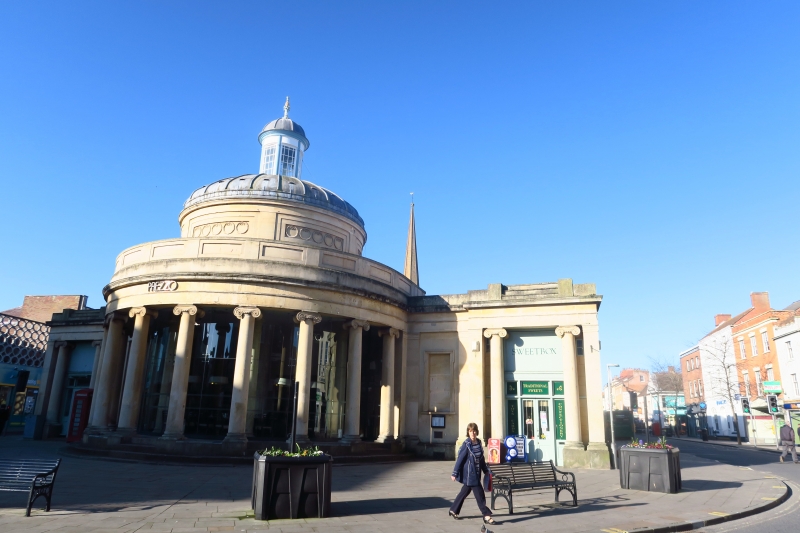 Includes: Nos.1-11 HIGH STREET.
Corn exchange and market house. 1834. By John Bowen. Corn
Exchange of 1875 by Charles Knowles. Limestone ashlar with
slate roofs and lead dome.
Tall single-storey market hall to the centre, flanked by lower
2-storey shops to the sides; Corn Exchange fronting market
hall set to rear of a spectacular shallow-domed circular
portico to the building is the focal point of Cornhill. A tall
glazed hexagonal domed lantern with a large finial surmounts
the dome which stands on a drum with six recessed panels,
those to the front contain raised olive wreaths. A larger
circular parapet wall over a double colonnade has recessed
panels and an entablature supported by Ionic columns to the
front with Tuscan columns behind. The paired plinths are set
in a circle of 4 steps.
To the sides the entablature, with a blocking course replacing
the parapet, continues around the building. The colonnade is
flanked by recessed panels with Tuscan pilasters and blind
flat-arched windows in moulded eared architraves which taper
towards the tops. The stepped-forward bays to the outer ends
have 3 steps to the centre of the blocking course and paired
plinths to Tuscan antae and Ionic columns in antis which flank
C20 shop fronts.
The returns in High Street and Cornhill have the central bays,
entrances to the market hall, stepped forward; they are
pedimented over Tuscan antae and Ionic columns in antis on
double plinths.
The bay to left of the right return has 3 steps to centre of
blocking course and paired Tuscan pilasters flanking a
plate-glass shop-front with a 3-light horizontal window above.
Between this and the centre are 5 unequal bays with gauged
flat stone arches articulated by Tuscan pilasters; C20 doors
and plate-glass windows below 3-light plate-glass horizontal
fixed windows which fill the upper part of each bay.
5 similar unequal bays to right of the central entrance have
an additional storey; this has 6 plate-glass sash windows in
moulded eared and shouldered architraves below a cornice and
blocking course. Window to right is between paired Tuscan
pilasters.
To right of the central entrance pediment are the faintly
painted words POST OFFICE. The left return in Cornhill is
similar though single storey with a similar pedimented
entrance in the left projecting bay.
INTERIOR: the Corn Exchange immediately behind the rotunda is
square with a glazed hipped roof above horizontal-planked
coving and rich late C19 ornament to front and back walls. The
central entrances have Byzantine-style semicircular gauged
brick arches each with a slightly pointed arch to the
extrados; a large keystone; heavy cable moulding in a concave
moulding to the intrados; Town Arms to tympanum of the rear
arch and angels to tympanum over the main entrance. Flanking
the entrances are triple concave ashlar niches in similar
style with floral capitals to stone columns; the central,
slightly larger niches have windows, some now blocked.
The market to the rear has a late C19 iron-framed roof over
original open-air area; range to rear of market hall retains
early C19 king-post roof with later clerestorey. The
undercroft of the rotunda, now public toilets, has brick
vaulting.
SUBSIDIARY FEATURES: cast-iron railings to the sides of the
colonnade flank the entrances to the undercroft. Tall
cast-iron double gates to the market hall entrances have
long/short railings, arrow head to short ones, fleur-de-lys to
long ones, a diamond-pattern frieze to middle and a scroll
frieze below the top rail.
History: The buildings occupy an island which had been
developed as shambles in the mid C14. John Bowen was an
amateur architect who worked as an India merchant (Pevsner). A
very fine example of a market building of this scale and
architectural quality, of major townscape value in the centre
of Bridgwater. The town markets for corn, livestock and cheese
were by the 1790s the biggest in Somerset.
(Buildings of England: Pevsner N: South and West Somerset:
London: 1958-: 98; Kelly's Directory: Somerset: London: 1910-:
138; VCH: Somerset: London: 1992-: 206).