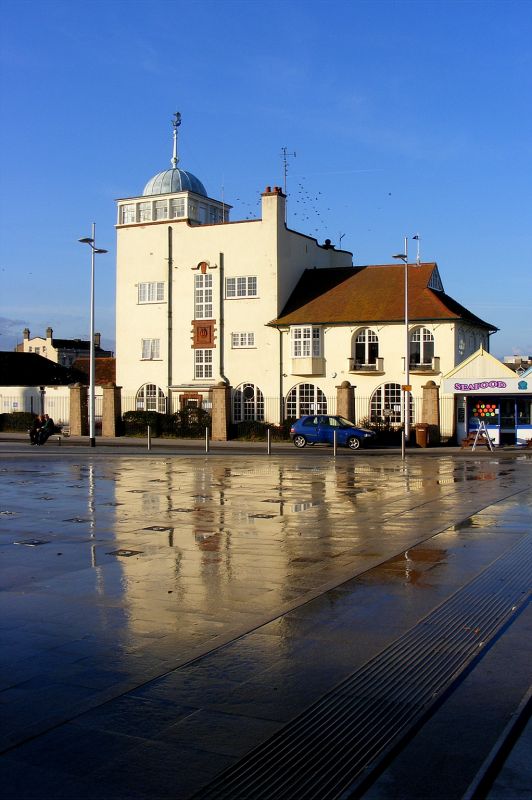 Purpose-built yacht club. 1902-3 by G & F Skipper of Norwich.
Rendered and whitewashed brick under plaintile roofs. Very
advanced design for its date. L-shaped, with an engaged tower
in the inner angle opposing a square observation room at the
top of the outer angle.
2-3 storeys. The south front is composed of a 3-storey, 3-bay
square block with the observation room at the top. In the
centre is a low entrance porch with a panelled and glazed door
flanked by a 3-light semi-circular window with glazing bars
either side. The windows above are casements of varying
design. At the first floor is a moulded brick panel with a
sailing ship moulded in high relief brick. The observation
room is glazed all round under a copper dome.
To the right is a 2-storey wing under a half-hipped roof with
a further semi-circular-headed casement to the ground floor
and three windows to the first floor: 2 round-headed casements
with balconies and, to the left, a canted bay window. The east
elevation is lit through a large segmental sash with 18/18
glazing bars, and the upper storey through 3 circular windows
with casements. The hip of the roof is pierced by a triangular
sash with glazing bars. The north side has, between the arms
of the L, a curved and glazed single-storey bow. Behind it
rises the 3-storey engaged round tower illuminated through
casements to the first floor and a band of brick-dressed
lights at the second floor. The hipped northern arm of the L
has casements with glazing bars.
INTERIOR. The entrance leads into a square central hall partly
top-lit from an open ceiling well into the first floor. A
concave wall separates the hall from the bar to the
north-east, which is entered through bowed double doors with
glazing. The restaurant in the north-west corner has double
muntin doors with leaded and glazed upper panels and a
segmental overlight. The closed-string staircase has tall
square newels tapering above the handrail and terminating in
saucer finials, in a style being developed by Voysey. Reeded
balusters. The first floor has an octagonal open well looking
into the ground-floor hall and protected by a reeded
balustrade. The doors to the 2 principal rooms are of muntin
type with stained glass panels. The north room also has a
fireplace with a 3-panel overmantel.
(Goodey C: 120 Years of Sailing: Beccles: 1980-: P.12).