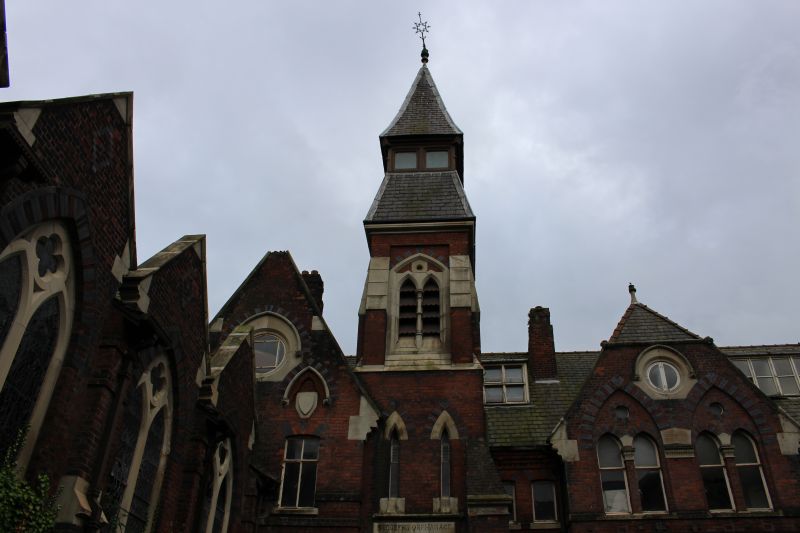 Orphanage, now nursing home. 1872, by R.W.Hughes for patron
Mrs Maria Holland. Red brick in English bond with blue brick
and sandstone ashlar dressings, Welsh slate roof. L-plan
formed by main range on east-west axis facing north and long
chapel wing projecting on the east side, with porch tower in
angle. High Victorian Gothic style. Two storeys with basements
and attics. Tower has main entrance in base, with 2-centred
moulded stone arch under blue-red brick relieving arch,
panelled door and overlight (plain glass replacing stained
glass), buttress to right, and plaque above door lettered "St
Joseph's Orphanage / Erected and endowed by / Mrs Maria
Holland / 1872"; 2 lancet windows below the belfry stage which
has offset angle buttresses and louvred 2-light openings with
colonettes and 2-centred relieving arch, and a 2-stage
pyramidal spire interrupted by mid-height windows. The main
range has a gabled centre breaking forwards, with a projected
ground floor lit by transomed windows beneath a band of cross
motifs, 2 pairs of arched windows at 1st floor each with a
recessed oculus beneath the relieving arch, an oculus above
with a hoodmould, and a half-hipped roof; and its outer bays
have 2-centred arches to the ground floor windows, and small
segmental-headed windows beneath ornamented brick eaves. The
chapel wing to the left has large arched 2-light windows with
original patterned glazing, and one has stained glass. Rear
elevation is symmetrical, in similar style, with gabled ends
and centre, and has (inter alia) a statue in a canopied niche.
Hospital wings added to east end and attached to west end.