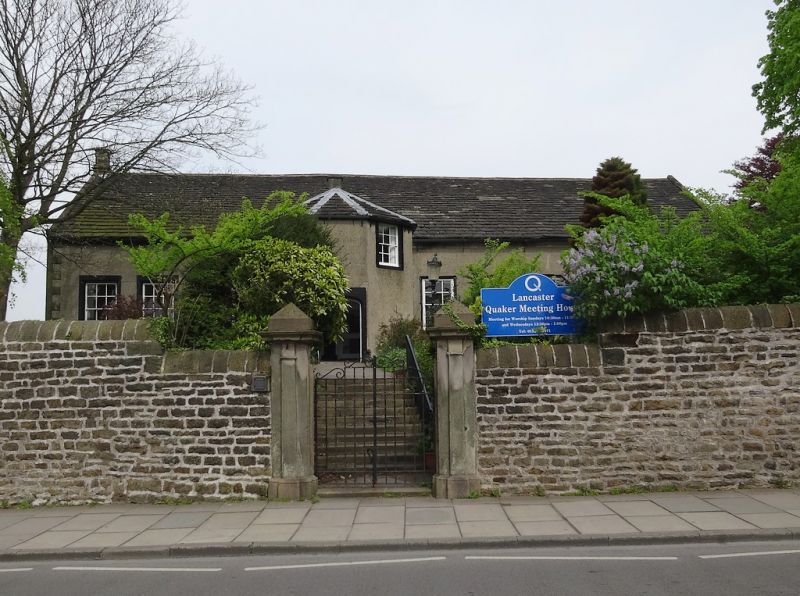 Quaker meeting house. 1708, altered 1769, extended 1779 and
1790, and altered internally early C20 and 1969. Sandstone
rubble, pebbledashed at the front. Roof of stone slate at
front and slate at rear.
Single-storey, with 2-storey porch and with attic storey above
left-hand (west) meeting room. 3 bays to left of porch and 5
to right, with projecting ashlar quoins. Windows have painted
rebated and chamfered surrounds, with hinge pins for shutters,
and have glazing bar sashes, the first of which were installed
in 1769 when the mullions and transoms were removed from the
original cross windows. The left-hand window was added in 1789
when the small meeting room was enlarged, and the 2 right-hand
windows were added when the large meeting room was extended.
The porch, which was probably added in the late C18, has
canted sides which each have a glazing bar sash in a plain
stone surround lighting the upper room. The doorway has a
cyma-moulded surround with a lintel carved with a
semi-elliptical arch with keystone. The gables are coped.
The left-hand gable has an ashlar chimney stack with a cornice
and weathered offset. Near the junction of the porch and the
main roof is a second chimney cap. The right-hand (east) gable
wall is part of the 1779 extension, is of coursed squared
sandstone and has a Venetian window with stone surround and
Gothick glazing.
Towards the east end of the rear wall a 3-light rebated and
chamfered mullioned window has been exposed by the demolition
of adjoining school buildings. A rear wing towards the west
was added in 1852 as a warden's cottage and further additions
were subsequently made at the rear as part of the former
Friends' School.
INTERIOR: inside the porch a chamfered doorway which led to
the left-hand meeting room has a re-set datestone inscribed
'1677', re-used from the first meeting house on the site.
Attached to the wall is the inscribed grave slab of John
Lawson, removed from the Friends' burial ground in Wyresdale
Road. The north gallery was removed from the large meeting
room in the early C20, and the west gallery was removed in
1969 when the screen dividing the room from the vestibule
corridor was moved. This is now partly glazed but incorporates
C18 woodwork, including raised and fielded panels, pilasters,
and a timber cornice. The north wall is panelled to dado
height with raised and fielded panels, and the east wall is
similarly panelled with plain panels. The high ceiling has 4
cased beams and 2 decorative C19 vents.
(Dove, R & Segebarth, H: A History of the Friends' Meeting
House Lancaster: Lancaster: 1990-).