A Grade I Listed Building in Pucklechurch, South Gloucestershire 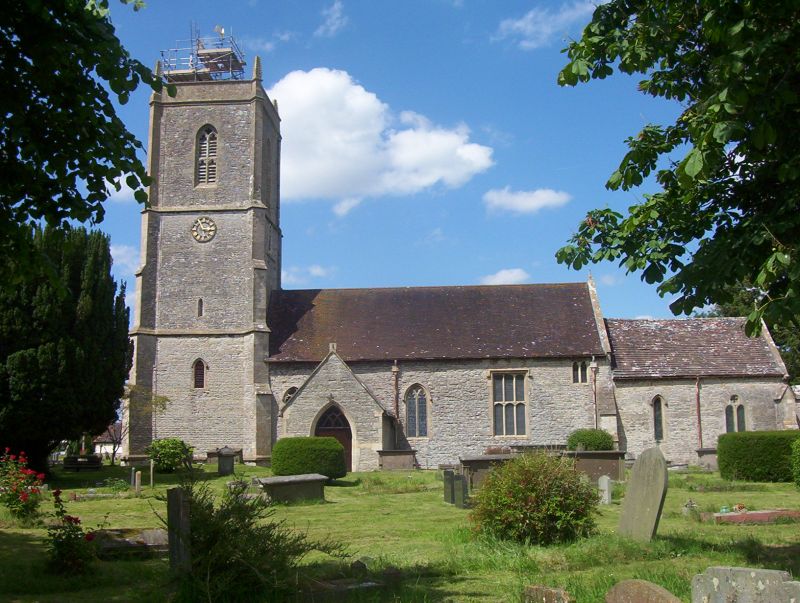 GV I
Anglican parish church, dedicated to St Thomas à Becket; of Norman origin, dating largely from the C13, with a C14 north arcade, C13 and C14 tower, C14 porch, and C17 alterations; restored in 1846 by R C Carpenter and again in 1889 by J D Sedding (dated on rainwater head).

EXTERIOR: the church is Early English in style, with a late Decorated north window in aisle. The three-stage tower has a west door with pointed arch, infilled by a late-C19 traceried three-light window with relieving arch; the first stage to the south has a pointed arched window with stopped hood mould and relieving arch; the second stage has small trefoil-headed lancets with a blocked opening to the east with relieving arch, and larger, similar single lights with bell louvres to east and west and clock to south; the third stage has large four-light windows, with trefoil heads to the lights, four-centred arched head and bell louvres; there are weathered diagonal buttresses, moulded string courses, a renewed ashlar parapet and coping, crocketed pinnacles and cockerel weathervane, and a stair turret at first and second stage to the north-east; a single-storey flat-roofed C20 church room is attached to the north. The five-bay nave has two tall, pointed-arched two-light windows with trefoil heads, and stopped hood mould to left. The porch sits between them. To the right is a large, rectangular six-light window with chamfered segmental heads and hood mould, to right at upper level a small, rectangular two-light window with trefoil heads, formerly lighting the rood loft; there is a buttress, and overhanging eaves on wooden corbels. The gabled porch has a worn metal sundial as a finial, a pointed arched opening with a roll-moulded and hollow-chamfered surround, quoins and courses of freestone, with similar eaves. Internally, the porch has stone benches, a two-bay C19 roof with two rows of purlins and cambered collars, and a C19 studded door. The exterior of the aisle has a three-light, pointed-arched east window, with a stopped hood mould and relieving arch, and elongated trefoil heads; to the north (from left), a late Decorated three-light window, of three pointed-arched lancets of decreasing size; the second bay from right has a blocked Norman door with segmental head and imposts remaining, two buttresses to the left, with gabled tops. The chancel has a three-light east window with a pointed arch and stopped hood mould, and tall, gabled buttresses right and left; to the north, a pointed-arched lancet, a single storey vestry with lancet, door and buttress, and gabled buttress to the left; to the south, a tall, pointed-arched lancet, with restored mask stops to the hood mould, with relieving arch, a two-light window with a quatrefoil in upper section, a gabled buttress to the right with a gargoyle above, a carved man's head, and a cross finial.

INTERIOR: Internally, there is a pointed-arched door to the tower in a surround of two chamfered orders with broach stops. The nave has an arched-brace and collar roof, a C20 south door with a triangular moulded head. All the windows are in deeply-splayed reveals. The second window from the west has jamb shafts with moulded capitals to the opening, and similar jamb shafts to window. The C13 chancel arch has jamb shafts with stiff-leaf capitals and a low stone choir screen of the C19, and a squint to the left. The four-bay north arcade, dating from the C14, has pointed arches and two chamfered orders, octagonal piers with moulded abaci and broach-stopped bases. The aisle has a five-bay roof comprised of tie-beam, collar and two rows of purlins; there are rere-arches to the lancets. The chancel has a seven-panelled roof with moulded ribs and wall-plates, and rere-arches to the north and south windows; the north door to the vestry has a pointed segmental head, the east window has jamb shafts with stiff-leaf capitals, and similar stops to its hood mould; there is a piscina to the right.

FITTINGS: the fittings include a stone pulpit of 1846, by R C Carpenter. Carpenter also designed the C19 font with a round, foliage-carved bowl set on shafts in the nave; the baluster font in the aisle probably dates from the C18. The east window is by Joseph Bell, installed in 1853. The east window in aisle has glass by Clayton and Bell, 1886; south windows in the chancel are by Wailes, 1852. The Lady Chapel was refurnished in 1954 by Eustace H Button. A C14 stone tomb chest, re-used as an altar in the Lady Chapel, has three carved cusped quatrefoils.

MONUMENTS: these include an effigy of a lady in the aisle, dating from circa1325, with a later flat-topped Perpendicular canopy, above which rises a high ogee canopy with crockets and pinnacles, forming a rere-arch to north east window, and said to have been put up in 1888. An effigy of a civilian male also in the aisle, dating from circa 1360, with a similar flat-topped canopy with ogee arches to either side, a battlemented moulding to top, and Perpendicular panelling in spandrels, with fine carving. This couple may represent William de Cheltenham and his wife. In the nave: a marble tablet with heraldry, putti and open segmental pediment, to John Dennis, 1687 and other members of the family; a marble tablet by Viner of Bath to Anne Archer, 1822. In the aisle: a large baroque marble tablet with weeping putti, to Thomas Ridley, 1714; a marble tablet with a draped urn by Jones, Dunn and Drewett of Bristol, to Edward Hathway, 1798; a large stone tablet with an epitaph on slate, by Thomas Cam to a nameless deaf woman, probably a relation; a Renaissance, black and white marble tablet with Latin inscription, to John Dennis, 1638, attributed to Thomas Burnham. There are also various C17 and C18 ledger stones in both nave and aisle.

HISTORY: Pucklechurch, which appears from the archaeological evidence to have Roman origins, was an important settlement from the later Anglo-Saxon period, when it became the administrative, military and judicial centre of the Hundred which bears its name. The settlement, once forming parts of the ancient Forest of Kingswood, may have been a royal burh in the later Saxon period. Certainly it was the site of Edmund, King of Wessex's hunting lodge; he was murdered in Pucklechurch in AD946, and his body taken to Glastonbury Abbey for burial. The manor of Pucklechurch was formally granted to Glastonbury Abbey in AD950, and was subsequently transferred to Bath Abbey in the C13. After the Dissolution in the C16, the village underwent a phase of rebuilding and gentrification, with a number of large houses erected in the C16, C17 and C18, indicating that the settlement was relatively wealthy in this period. A further phase of expansion and prosperity occurred from the mid-C19, when a number of collieries opened in the parish.

The parish church was founded in the Norman period, and was perhaps a royal foundation, but the current building dates largely from the C13; a north aisle and south porch were built in the C14, together with parts of the tower. A chantry, now the site of the Lady Chapel, was set up by William de Cheltenham in 1337. There were further alterations in the C17, coinciding with the increased prosperity of the settlement after the Dissolution, and there were two major phases of work in the C19, the first, by Richard Cromwell Carpenter (1812-1855), in 1846-56, and the second, by John Dando Sedding (1838-91), in 1889. These included some reordering, and the replacement of some windows, the introduction of new fittings, and some stained glass. There was some further, minor refitting in the C20.

REASONS FOR DESIGNATION: The Anglican church of St Thomas à Becket, a Norman foundation with mainly C13, C14 and C19 fabric, is designated at Grade I, for the following principal reasons:
* Historic interest: the church retains fabric from the Norman period, and dates largely from the C13, with additions in the C14, and is thus substantially a medieval building
* Architectural interest: the C19 work to the church, carried out by R C Carpenter, and later by J D Sedding, is of good quality, reflecting the involvement of these experienced ecclesiastical architects
* Fixtures and fittings: the C19 fittings are of good quality, and are by recognised designers
* Monuments: the range and quality of monuments within the church, which date from the early C14 to the C19, and demonstrate a high level of quality in design and craftsmanship
* Group value: with the nearby listed buildings, and the large group of 15 churchyard monuments which are each listed in their own right