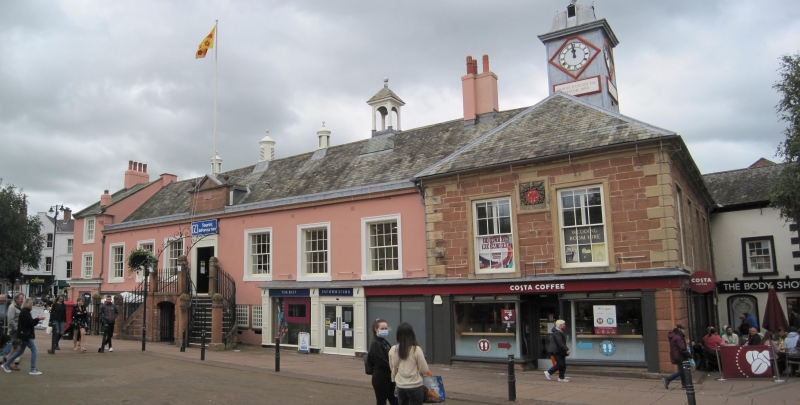 Includes: No.72 SCOTCH STREET.
Includes: Nos.1-7 ST ALBANS ROW.
Former town hall with shops beneath. 1668-9 (on the site of
the medieval town hall), with 1717 and C19 alterations and
additions.
Painted stucco walls on chamfered plinth, red sandstone eaves
cornice and solid parapet. 1717 extension is of red sandstone
ashlar with V-jointed quoins (all dressings of calciferous
sandstone) and eaves cornice; early C19 extension is of stucco
(over brick) with ground-floor pilasters and rusticated
ashlar. Graduated greenslate roofs, partly hipped; coped with
kneelers on higher early C19 extension, with vents and
bellcote on central part and clock tower cupola on 1717
extension. Painted stucco ridge chimney stacks.
Central oldest part is 2 storeys, 7 bays; right-angle right
1717 extension of same height has 2 projecting bays on the
main facade and a 5-bay return which is No.72 Scotch Street;
higher 3-storey single-bay early C19 extension at left; the
shops at the rear are Nos 1, 3, 5 & 7 St Albans Row; forms an
overall L-shape.
Central external serpentine stone steps to upper-floor council
chamber (added c1825, replacing C17 steps) of 2 flights and
are of red sandstone ashlar with round and squared piers and
speared railings; segmental arch under stairs originally gave
access to lock up cells; above are double plank doors in stone
architrave under a pediment with the city arms and ball
finial. Ground floor C19 and C20 shop windows; upper floor
sash windows in C19 stone architraves (c1825 replacing
cross-mullioned windows). The bell and bellcote are an 1886
replacement after a fire.
The right extension has a panel on the main facade giving the
city arms, name of Mayor and date of 1717 in Roman numerals;
this and the Scotch Street facade have C20 ground-floor shop
windows and sash windows in stone architraves above. At the
right a segmental through archway gives access from Scotch
Street to St Albans Row. Clock tower on this extension is also
of 1717, with clock faces on 3 sides (originally with just an
hour hand) and ball and weather vane finial.
The left extension has C19 ground-floor shop windows; sash
windows above, those on the main facade in stone architraves.
The rear, facing St Albans Row, has ground-floor casements
windows and half glazed doors, restored in 1987 to their 1835
appearance; one upper-floor window, now partly blocked, was
re-exposed in 1987 to show this is one of the original 1669
cross-mullioned windows; other half-dormers were added in
1867.
INTERIOR: the council chamber has C19 wooden panelling; where
the main trusses have been cut away, carved city coats-of-arms
have been added; part of the panelled seating survives. Other
rooms have ribbed plaster ceilings and C19 panelled doors.
HISTORY: The original contract for the Town Hall dated 1668 is
in Cumbria County Record Office and an extract from the
council minutes for 23 July 1669 shows the work was carried
out; in Cumbria County Record Office is a voucher for a model
to be made for the new Town Hall in 1716 (Ca/2/3); there are
also vouchers for the old and new halls in 1732-3
(Ca/Vouchers/1732-3); a lithograph showing the Town Hall as it
appeared in c1780 is in M Nutter (1835); a watercolour of 1788
(Jackson Collection) shows that the left extension did not
exist then, but it is shown on an oil painting by William
Brown of 1825; there is also a contract for alterations dated
4 May 1825 (Ca/5/1/50). Details of the 1867 alterations are
given in Carlisle Journal (1867). Details on the history are
given in Trans. CWAAS, NS XC.
(Nutter M: Carlisle in the Olden Times: 1853-; Carlisle
Journal: 30 April 1867; Jackson Collection: Carlisle Library:
A693; Cumb. & West. Antiquarian & Archaeological Soc., New
Series: XC: P.170-171).