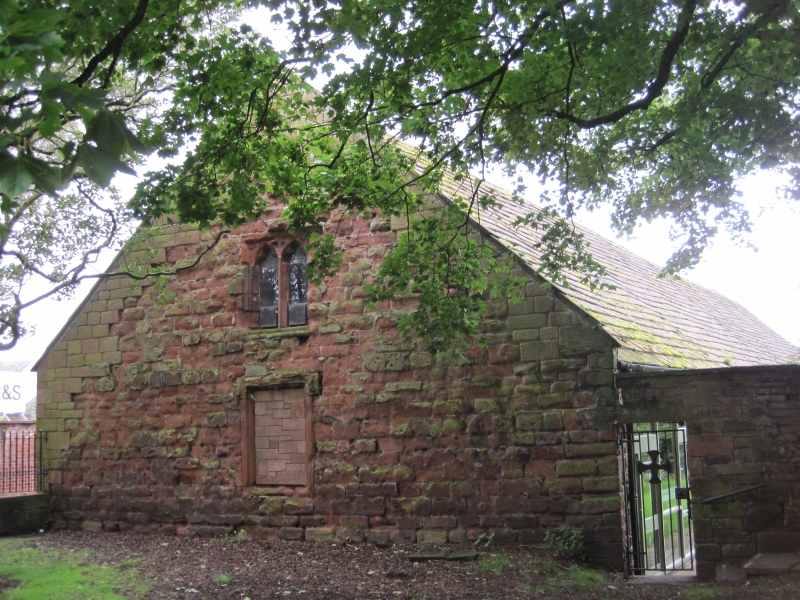 Tithe barn for the Priory of St Mary. For Prior Gondibour
c1470s, with C19 alterations and 1969-71 restoration. Squared
blocks of red sandstone (some with masons marks). Graduated
sandstone flag roof with one coped gable.
7 1/2 bays, single storey except for the last, westernmost,
bay which is now 2-storey. The north side was probably open
originally, and consisted of large timber posts supporting the
roof trusses. A small section of the later sandstone infill
has survived. The south elevation fronting onto Heads Lane is
a 3ft 7ins thick sandstone wall with 8 slit vents with wide
splayed reveals on the inside.
In 1824 the two eastern bays of the barn were converted for
use as the Carlisle Dispensary and a doorway and window were
inserted in this wall. These openings were blocked in red
sandstone during the C20 restoration. The eastern gable wall
has a high 2-light cusped-headed window and a blocked C19
window beneath. In 1875 the west bay and gable were in danger
of collapse and were dismantled. This part of the Tithe Barn
has now been reconstructed in painted concrete blocks, into 2
storeys containing kitchen and cloakrooms.
INTERIOR retains its massive oak roof trusses which are
supported on timber posts. The posts on the south side are
built against the sandstone wall and are supported by
sandstone corbels which are about one third of the way up the
wall. There are large concave braces from these posts to the
underside of the tie-beams. In addition on the north side
there are similar braces from the posts to the wall plate.
Only 6 of the 7 trusses survive and these have king posts with
2 parallel struts to each side from the tie to the principal
rafter. Also parallel to the struts are braces from the king
post to the rafter. Some of the king posts still retain
concave braces from the post to the ridge piece. 3 rows of
purlins.
For history see CR Davey CWAAS Trans.,NS LXXII.
(Cumb. & West. Antiquarian & Archaeological Soc., New Series:
Davey CR: LXXII: The Carlisle Tithe Barn: P.74-84).