Number 2 and Attached Walls and Railings 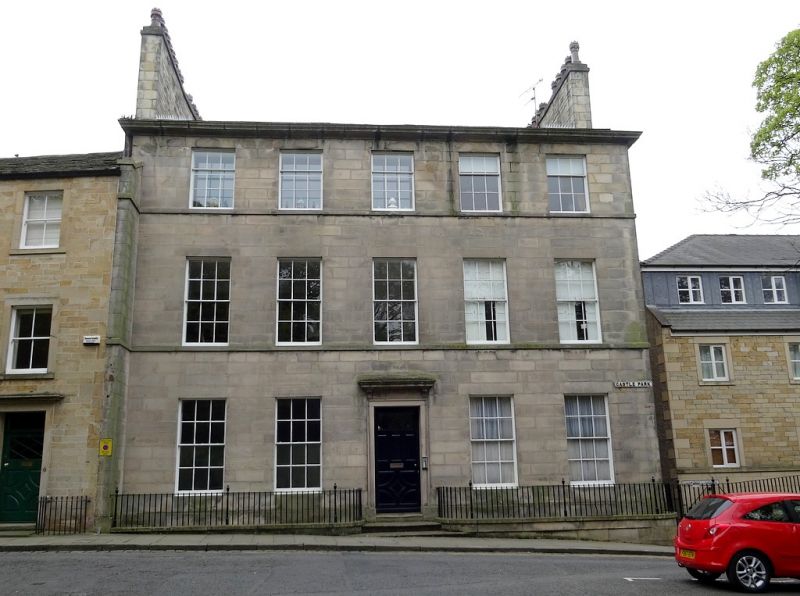 House, later a school, now flats. Early C19, altered C19 and
C20. Sandstone ashlar and slate roof with coped gables and
very prominent gable chimney stacks. Double-depth plan with a
2-storey service wing to left and, at the rear, a later
semi-octagonal projection to house the staircase, which
originally had been against the right-hand gable wall, as a
round-headed window shows.
3 storeys above a basement, expressed as a plinth. 5 bays with
a sill band on the first and second floors, and an eaves
cornice. The tall windows have plain reveals and glazing bars,
of 12 and 9 panes. The doorway, up 3 steps with nosings, has a
moulded architrave under a cornice carried on fluted brackets.
The door has an integral overlight and is panelled with 3
raised and fielded vertical panels above a square panel
subdivided with framing into a concave-sided hollow diamond.
To each side of the doorway is an area, protected by dwarf
walls and cast-iron railings, with stick balusters and
standards in the form of columns with urn finials.
INTERIOR: flying geometrical staircase with cast-iron
balusters of mid C19 form.