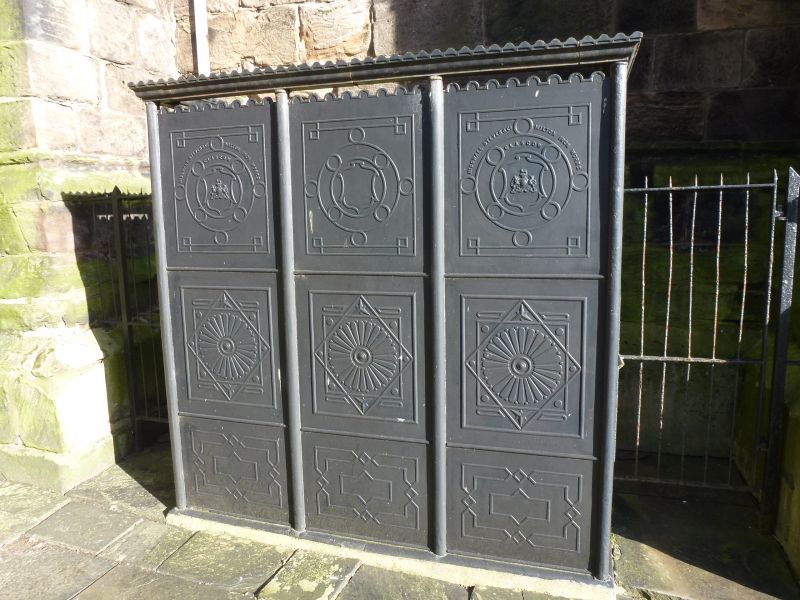 Parish church. Very complicated history of rebuilding and
enlargement, beginning in the C12 (part of north wall of
chancel), principally: the late C13 (south arcade of chancel);
the late C14 (steeple at west end of south aisle); the C16
(west tower c.1540-50, and probably the Derby and Scarisbick
chapels); c.1729 (rebuilding of nave and aisles in classical
style, of which only the south aisle wall remains); and
concluding with thorough restoration in 1877-91 by Paley and
Austin (north aisle and nave arcades).
The plan now consists of a nave with west tower, north aisle,
south aisle with west steeple and now incorporating
Scarisbrick chapel at its east end, chancel with vestry to
north and Derby chapel to south; plus, in the angle between
the tower and the steeple, a late C19 cast-iron urinal.
Coursed squared sandstone, stone slate roofs.
The west tower has a massive square plan, and is of 3 unequal
stages (the 1st forming the lower half); with diagonal
buttresses, a weathered plinth, weathered coping to the 1st
stage, set-back upper stages with weathered sillband, and an
embattled parapet with crocketed pinnacles in the centre and
at the corners.
It has a 4-centred arched west doorway with 3 orders of
roll-moulding, a restored Perpendicular 3-light window above
the doorway, a square-headed looplight to the 2nd stage, and
coupled 2-centred arched 3-light belfry windows with
intersecting tracery and stone louvres; and in each of the
other sides a 3-light window offset eastwards.
The 6-bay north aisle (by Paley and Austin) is buttressed,
alternate buttresses carried up as pinnacles dividing windows
into pairs, and large 3-light windows with varied
Perpendicular tracery; and the continued 2-bay vestry is in
similar style.
The C18 three-bay south aisle has its original parapet
including a large rectangular sundial forming an upstand with
scrolled supporters, but late C19 three-light windows in
Perpendicular style.
Attached at the west of this aisle is the late C14 steeple,
which has a square 1st stage with angle buttresses, a doorway
at its base (enclosed by a late C19 shallow angled porch) and
a 2-light window above; a broached octagonal 2nd stage with an
oversailing parapet; and an octagonal spire (rebuilt 1832).
Continued to the east of the south aisle, and stepped out from
it, is the Scarisbrick chapel which has 2 large 3-light
windows with transoms; and beyond that the Derby chapel, which
has 2 large 4-light windows, and a very wide 7-light east
window with a transom at the springing of the arch and 14
small round-headed lights above.
The chancel has a 5-light east window with a transom, and
incorporated in the masonry below this are 2 carved stones,
one depicting a raven and the other with 2 recumbent figures.
INTERIOR: late C19 five-bay aisle arcades of capital-less
moulded piers and 2-centred arches similarly moulded in 2
orders; broadly-chamfered 2-centred arch from steeple to south
aisle; wooden ceiling to nave with carved hammerbeam trusses;
on north side of chancel, part of C12 wall with deeply-splayed
Norman window which has shafts with scallop capitals; and on
south side a C13 two-bay arcade of double-chamfered 2-centred
arches on octagonal pier and responds with moulded caps; C17
parclose screens to 2 sides of Derby chapel, with turned
balusters; in this chapel, 2 pairs of C15 alabaster effigies
(mutilated) and 2 tomb chests with panels containing
quatrefoils; in Scarisbrick chapel, a hatchment and a wall
monument dated 1737; at west end of south aisle, bookshelves
with names and date 1682 in raised lettering; and font dated
1661, given by the Countess of Derby.
Font, stone, dated 1661, with panelled octagonal basin
containing date, the letters C.R., a cross, hourglass, pelican
on a columnar base. Glass in tower by Holliday.