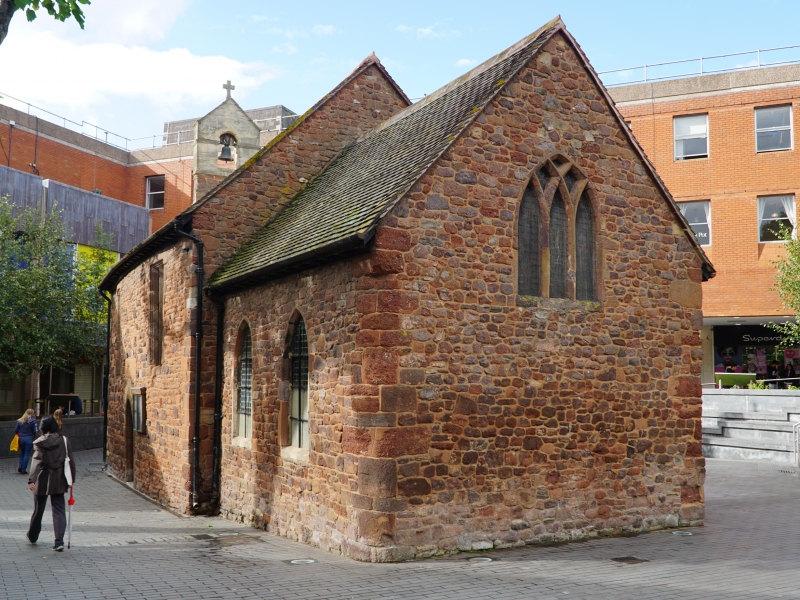 PLAN: Nave, chancel (on a slightly different alignment to the nave).

EXTERIOR: The church is a two-cell structure consisting of a small nave and lower chancel. Over the west gable is a single-light bellcote containing a medieval bell. The west wall is blind. The fenestration is varied. The chancel has a lancet window on the north side which also has an uncusped Y-tracery window. The east window has three-light uncusped intersecting tracery window. The nave has two-light plain mullioned windows, one on the north, two on the south, probably dating from the C16. The entrance is through a south doorway which has an almost semi-circular head.

INTERIOR: The interior walls have been stripped of their plaster. Between the nave and chancel is an arch of Bath stone with an inner order of chamfering rising from corbels. This is very evidently Victorian work and its neatness contrasts with the rest of the fabric ('unsympathetic' say Cherry and Pevsner). There is an open wagon roof over the nave and a keel-shaped one over the chancel. In the north-east part of the nave is a rood-loft stair.

PRINCIPAL FIXTURES: The oldest item is a circular, tapering C12 font with a band of beaded ornament round the middle of the bowl. In the chancel there is a C13 piscina with a trefoil head. Above this is a small square opening for storage. The pulpit is Jacobean, polygonal, with foliage around rectangular panels. On the south wall of the chancel are a pair of corbels, one probably C12, the other C13. There are a five wall monuments from the C18th and early C19 which were brought here from All Hallows' Church when it was demolished in 1906 for road widening: the best is to I Loveday Buller (d 1711) with a border of flowers, fruit and skulls. The bell was cast by the Exeter bell-founder, Robert Norton, in the C15. The east window has stained glass of 1899.

HISTORY: The dedication to St Pancras is suggestive of a very ancient foundation but the church is not mentioned until 1191. However, what was said to be a Saxon doorway was discovered in the south wall of the chancel but all trace of this vanished in the late C19 rebuilding. What we see today is probably largely C13 work, with the chancel arch being carefully rebuilt in the 1880s by the well-known church architect, J L Pearson. The church has had a chequered history, being disused between 1658 and 1831. In 1831 the chancel arch was destroyed and replaced by a plain brick one: this in turn was replaced by the present one under Pearson. The area round the church was comprehensively redeveloped from 1969 as a shopping complex and the church sits in a sunken area surrounded by shops. Despite this unprepossessing setting, the church is of significance as a rare survivor among the numerous examples that existed in the medieval city.

REASONS FOR DESIGNATION:
St Pancras' Church is designated at Grade II* for the following principal reasons:
* It is of special interest as a small medieval urban church and is a reminder of how Exeter and other important English towns and cities were supplied numerous churches and chapels in the Middle Ages
* It retains a number of features of interest, notably the Norman font and Jacobean pulpit
* In spite of a chequered building history over the centuries, it retains medieval fabric
* The involvement of the highly significant Victorian church architect, J.L Pearson, is noteworthy
* Such small form churches are relatively rare survivors