A Grade I Listed Building in Poole Town, Poole 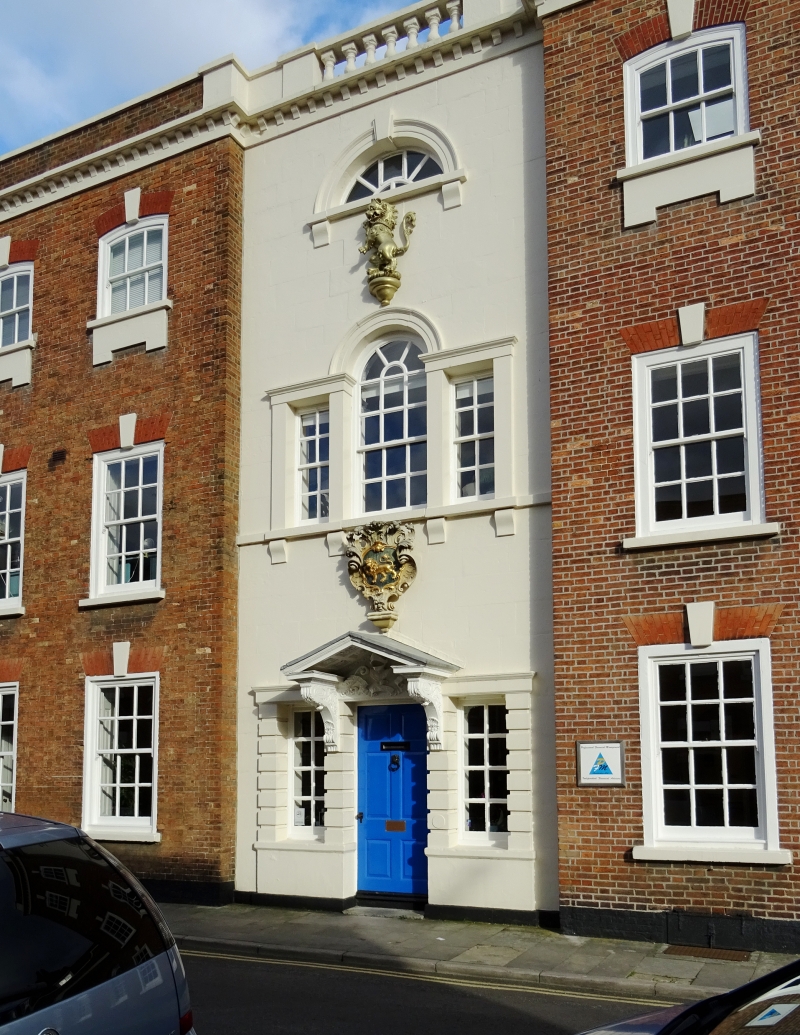 Formerly known as: No.67 MARKET STREET.
House, now office. 1746-9, by John Bastard. For Sir Peter
Thompson, extended early and late C19. Flemish bond brickwork
with rubbed brick headers, with limestone ashlar dressings and
central bay, left-hand exterior and right-hand ridge stacks,
and hipped slate roof. H-plan with right-hand wing and rear
extension.
3 storeys and basement; 5-window range, with single storey
4-window range. Double-fronted with a slightly recessed ashlar
central bay, modillion cornice and parapet with a central
balustrade. The entrance has a fine enriched open pedimented
canopy with coffered soffit with paterae, with scrolls
inscribed CONSCRIBE and a helmet and motto over the doorway,
and banded rustication to flanking windows; over the pediment
is a cartouche with the Thompson arms on a corbel. Central
first-floor Venetian window and second-floor lunette above a
relief of a lion rampant, the Thompson crest. Outer windows
have keyed rubbed brick heads in flush exposed frames,
6/6-pane first- and second-floor sashes, cambered second-floor
3/3-pane sashes with ashlar aprons.
Right-hand early C19 range has a flat cornice and ramped
parapet with 3 round-arched windows with 8/12-pane sashes and
a single hipped dormer to a mansard roof, and gable stack.
Left-hand return has 2 exterior stacks with 2 windows between.
Rear has a central recess to a first-floor Venetian window and
second-floor lunette windows lighting the central halls, with
a SE late C19 four-window wing with keyed 2/2-pane plate-glass
sashes, and a bracketed cornice and balustrade with urns. Late
C20 conservatory across the centre and NE.
INTERIOR includes fine panelled rooms with some original
carved marble fireplaces, decorated rococo plaster ceilings,
notably the front right-hand ground-floor and central
first-floor rooms, the latter stretching from front to back,
and a central right-hand stair with alternately twisted and
plain column-on-vase balusters, fluted column newels, ramped,
carved handrail, enriched brackets and scrolled curtail.
HISTORICAL NOTE: a formal garden and canal formerly extended
in front of the house. The stair was by the same craftsman as
that of Nos 20 Market Street (qv) and West End House, St
James's Close (qv).
Sir Peter Thompson (1698-1770) was a Hamburg merchant and
native of Poole, who lived in Bermondsey until 1763 when he
retired to his house in Poole. The finest Georgian town house
in Poole, the emphasis on the central bay being a Baroque
device used by the Bastard brothers at Blandford Forum.
(RCHME: County of Dorset (South East): London: 1970-: 229;
Buildings of England: Pevsner N & Newman J: Dorset: London:
1972-: 324).