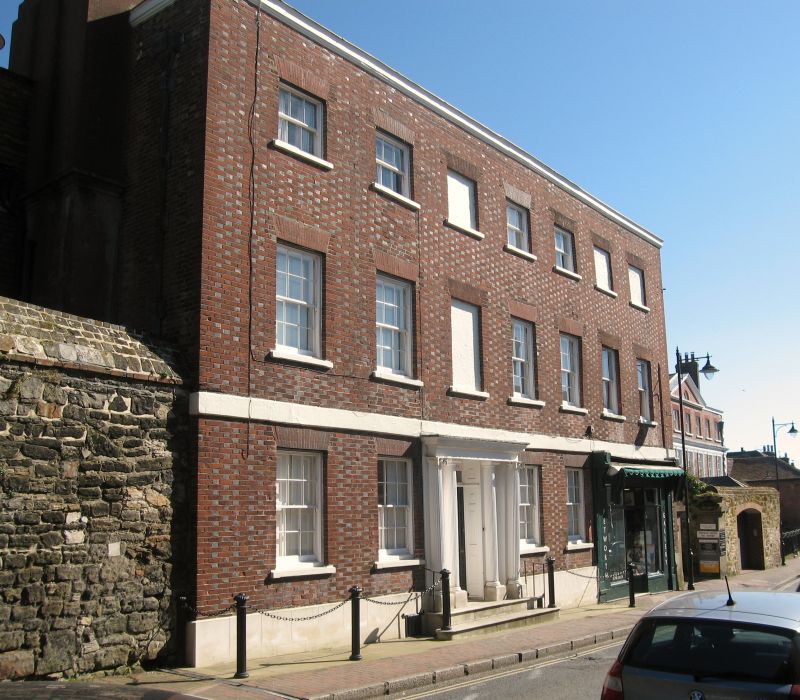 This is a large square block that was probably two houses originally but is now
divided into four premises. The exterior dates from the C18 but part, if not all,
the interior is older. Three storeys. The west front has six windows and one dummy
window. Red brick and grey headers alternately. Stringcourse of Roman cement above
ground floor. Moulded cornice and parapet. Most glazing bars intact. Wide doorway
with a pair of Doric and Ionic engaged fluted columns, the inner ones slightly
recessed, with rectangular fanlight and door of six fielded panels at the head of two
steps with iron handrail. Small C19 shop window to the south of this.
The south front (Stringer's Hall and Stringer's Cottage) has four windows. Partly
red brick and grey headers, partly red mathematical tiles, partly weather-tiles. Two
curved bays on ground and first floors with cornices over. Glazing bars intact.
Doorway between the bays with engaged columns, pediment, semi-circular fanlight and
door of six fielded panels at the head of three steps with iron handrail.
The north front has a projection of two storeys and three windows (Denne Court).
This is faced on its north with red brick and grey headers and on its west side with
weather-tiles. Stringcourse, cornice and parapet.