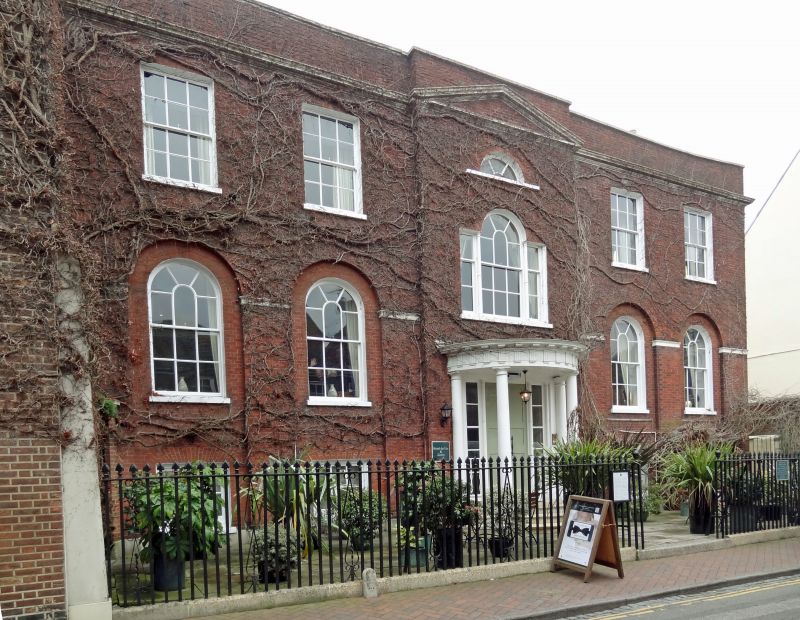 GV II*
House, now a hotel. Built in the second half of the C18 for Isaac and Benjamin Lester, MP; by John Stretland, a local builder.

PLAN: It is built in a mid-Georgian style and has a double-depth plan with three storeys, attics and a semi-basement.

EXTERIOR: The five-bay front faces onto Thames Street and is a symmetrical composition with an impost band to the ground floor, cornice and a parapet. The slightly projecting central bay which rises to a small pediment has an entrance doorway and stair windows which are lower than those to the flanking floors. Curved steps lead up to a semi-circular Doric portico with triglyphs, and a six-panel moulded door with margin lights. Above the entrance is a central first-floor Venetian stair window with a small lunette above. The basement and ground-floor windows are set within semi-detached-arched recesses with rubbed brick arches. The flat-headed basement and first-floor windows have six/six-pane sashes including radial heads to the ground-floor windows. The right-hand return has lateral stacks with a central first-floor window above an oculus.

INTERIOR: (Not inspected 2010) Contains a large flagged entrance stair hall with wainscotting, dado and side niches, and enriched bracketed cornice. It has a fine Imperial stair with cast iron balusters, each third one enriched. The staircase is supported on paired wooden columns with Tower of the Winds capitals, going up a single flight and returning in two to the front landing. The rear dining room has a recessed alcove with flanking attached columns and a marble fireplace with a relief of two dried cod, symbols of the family's wealth. There are panelled doors and cornices; and basement services.

SUBSIDIARY FEATURES: The attached front walls and spear-headed iron railings with modern interval panels with decorative wrought ironwork, and a side wall.

HISTORY: From the late C17 until its decline in the mid-C19, Poole was considered one of the busiest ports in England, establishing strong trade links with Europe, the Baltic and North America. The Hotel du Vin is a former merchant's house that was constructed in the second half of the C18 and is one of the largest houses in Poole. Sources indicate that it was built for Isaac Lester whose family was prominent in the Newfoundland trade, trading mainly in (cod liver) oil; the source of much of its wealth. Following Isaac's death in 1776, his brother, Benjamin (1724-1802) returned from North America to live in the Thames Street house, becoming Mayor in 1779 and a leading spokesman for the Poole merchants. He served as Member of Parliament from 1791 to 1796, and died in 1802.

REASON FOR DESIGNATION:
The Hotel du Vin, formerly the Mansion House, dates from the second half of the C18 and is designated at Grade II* for the following principal reasons:
* Architecture: the proportions and thoughtful arrangement of features in an imaginative, classical composition
* Fittings: there are a number of survivals of historic features including the staircase, some fireplaces, cornices and panelled doors
* Historic interest: its close association with a prominent C18 family whose wealth was founded on the Newfoundland cod trade
* Group value: it has strong contextual interest, having group value with a large number of listed buildings in Thames Street, and as one of the two largest houses in Poole is illustrative of the town's prosperity in the C18.