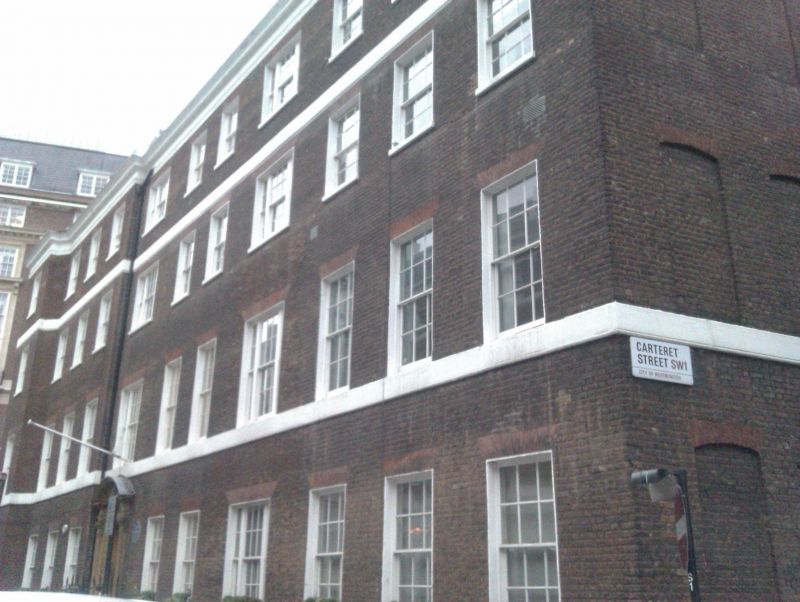 Substantial townhouses, built in phases with elements dating from 1776, 1845-1846, the mid-1870s and 1930-1931. The site was entirely rebuilt behind retained façades in 2015-2020 as part of a wider residential redevelopment scheme by the architectural practice PDP London.

MATERIALS: red brick with consistent dark staining across the façade, red-brick gauged arches to the windows throughout.

PLAN: principal façade to the north, to Queen Anne’s Gate, with return elevations to Dartmouth Street (east) and Carteret Street (west). The residential apartments to the rear (excluded from the listing) were built as part of the 2015-2020 redevelopment of the site.

EXTERIOR: the multi-phased elevation is of four storeys including a basement and dormered mansard (rebuilt in 2015-2020). The western seven bays to Queen Anne’s Gate and the two return bays to Carteret Street are earliest extant phase of the elevation (dating to 1776; this being the extent of 8 Park Street at this time). The eastern four-bay range was built in a carefully-matched style by Ambrose Poynter. This section of the façade steps forward slightly with a canted corner to the junction with Dartmouth Street (the single return bay having been built as part of the 2015-2020 redevelopment). There is a consistent stucco string course above the ground and second floors to Queen Anne’s Gate and projecting cornice above the third floor, with the later dormered mansard set back behind. The entrance to Queen Anne’s Gate is positioned in the easternmost bay of the earliest phase. This includes a richly-carved surround with pilasters and a segmental pediment integrating the Cubitt family crest and the motto ‘felix qui prudens’ (happy is he who is prudent) flanked by two labourers, added 1930-1931 by the Cubitt Building Company as part of their conversion. The sash windows and frames throughout were replaced as part of the 2015-2020 redevelopment.

INTERIOR: the residential building behind the principal elevation was designed by the architectural practice PDP London and completed in 2020. No historic fabric is retained behind the façade and this is specifically excluded from the listing.

SUBSIDIARY FEATURES: cast-iron railings are attached to a coping at the front of the building, mostly of later-C19 date, although the eastern extension of the railings into Dartmouth Street is later.

The powers of exclusion under s1 (5A) (a) of the 1990 Act have been invoked to exclude the rebuilding behind the façades from the listing, as is reflected in the associated designation map. The modern single-bay return section of the facade to Dartmouth Street and the street-facing pitch of the mansard form an integral part of the façade and are to be treated as part of the listing.

Prior to 1873, Queen Anne’s Gate was divided into two separate streets, with Queen Square to the west and Park Street to the east; the former intersection being marked by the statue of Queen Anne which is adjacent to 13 Queen Anne’s Gate. The earliest development on what was Park Street dates to 1686-1687, when building leases were granted by Sir Robert Atkins. It appears that at this time the site of the present 3 Queen Anne’s Gate was developed with four separate houses. These houses stood until around 1776, when they were levelled and replaced by one large new house, 8 Park Street, of which retained elements of its façade constitute the earliest, western part of the present building. In 1845-1846, a new house (to later become 1 Queen Anne’s Gate) was built on the vacant site to the east of 8 Park Street, incorporating the north-west corner of 8 Dartmouth Street. This was built to designs by Ambrose Poynter, a notable architect of the period and founding member of the Royal Institute of British Architects in 1834. Following the development to the east, into the mid-1870s, 3 Queen Anne’s Gate was remodelled and further extended by Captain Lewis Guy Phillips, who acquired the neighbouring 1 Little Park Street (what is now Carteret Street) and rebuilt this as part of an enlarged, unified house. Both 1 and 3 Queen Anne’s Gate remained as large independent houses in the early years of the C20. However, after 1916, number 3 was divided and sublet to the Commissioners of HM Works for use as departmental offices. The two houses were then amalgamated into one in 1930-1931, when it became the Cubitt Building Company headquarters. The remodelling involved the addition of the central C18-style timber door surround, a mansard roof and substantial alterations to the interior. The site was subject to several subsequent phases of internal remodelling later in the C20 and, in 2015-2020, formed part of a redevelopment scheme by the architectural practice PDP London, which involved residential redevelopment to the south along Dartmouth Street and Carteret Street with only the façade retained at 1 and 3 Queen Anne’s Gate.

From its early development as Queen Square and Park Street, Queen Anne’s Gate has had strong connections with many prominent politicians and statesmen. These historic connections are reflected in one of the largest concentrations of Blue Plaques in London, including examples commemorating Lord Haldane (1856-1928) at 28 Queen Anne’s Gate and Prime Minister Lord Palmerston (1784-1865), who was born at number 20. Sir Edward Grey, Viscount Grey of Falloden (1862-1933), lived at 3 Queen Anne’s Gate between 1906 and 1913. He was the longest continual Foreign Secretary, serving in the Liberal governments of Campbell-Bannerman and Asquith between 1905 and 1916. Grey was the last person to live at the house as a private residence. His time at 3 Queen Anne’s Gate is marked by a GLC Blue Plaque, installed in 1981. Prior to Grey, the house was occupied for around four years from 1785 by Sir James Harris, who subsequently became the 1st Earl of Malmesbury, and, in 1879, was leased to Edward Knatchbull-Hugessen, a British Liberal politician who served as Under-Secretary of State for the Home Department under Lord Russell in 1866 and under Gladstone from 1868 until 1871.

1-3 Queen Anne’s Gate is listed at Grade II for the following principal reasons:

* as a well-composed pair of substantial townhouses, later unified, built in distinct phases with elements surviving from 1776, 1845-1846, the mid-1870s and the 1930s. The secondary phases of work, including parts of the façade to number 1, designed by the renowned C19 architect Ambrose Poynter, reflect the careful proportions and material palette established by the original later-C18 sections of the façade.

* for its strong associations with several notable political figures, including Sir James Harris, Rt Hon Edward Knatchbull-Hugessen, and Sir Edward Grey (who is commemorated by a GLC Blue Plaque at number 3).