Vault, Tombchest and Memorial of the Hurleston Family Attached to East End of Church of St Peter 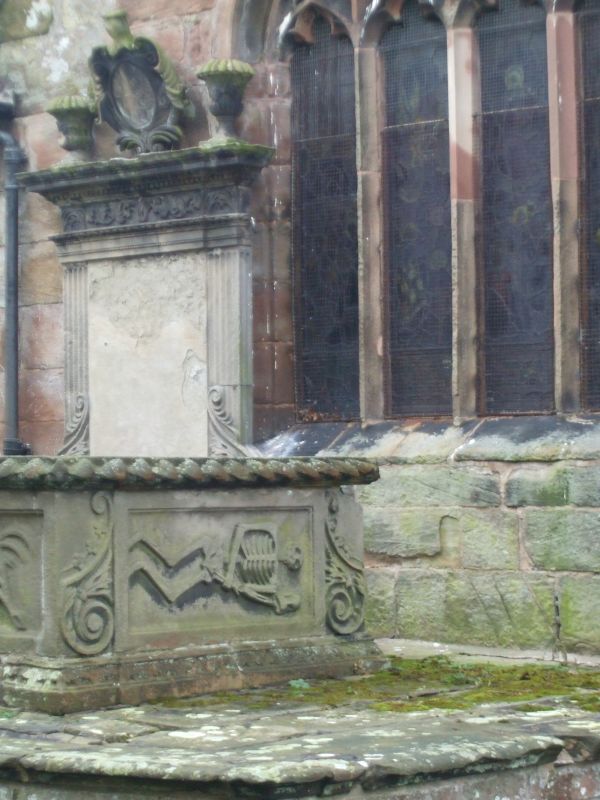 Entry Name: Vault, Tombchest and Memorial of the Hurleston Family Attached to East End of Church of St Peter

Vault, tombchest and memorial plaque: vault and tombchest c.1670 and
memorial plaque formerly dated 1727 for members of the Hurleston
family. Ashlar buff sandstone. Large plain rectangular vault cover
has a simple plinth and a weathered roof with a nosed edge. It
carries a Baroque tombchest on an acanthus plinth. The long sides
have carved recumbent skeletons (one male, one female) with scrolls at
the corners. The short sides have crossed palm fronds and the lid is
plain except for a heavily gadrooned border. Standing on the vault
against the chancel is an elaborate Baroque memorial tablet. Acanthus
plinth carries fluted pilasters with scrolls. Ornate flat pediment
supports a heraldic shield and 2 gadrooned urns. Full inscription of
the plaque is given from Ormerod, History of Cheshire, 1819, the
exfoliated parts in brackets

"(In this vault lies the body of Elizabeth, wife of Charles Hurleston,
of Newton esq., youngest daughter and coheir of Thomas Lander, of
Newhall, in the County of Lancaster, esq., by Elizabeth, daughter of
Edward Downes, of Shrigley, in the county of Chester. esq.)
(She was beautiful) in her Person,
Distinct in her Behaviour,
Dutiful Daughter in her Observance,
And had the (.........) long night,
A Happy Mother
She dyed the 19th of November 17(27), aged 32."

A good and interesting pair of Baroque Monuments, rarely found in
Cheshire outside the churches.