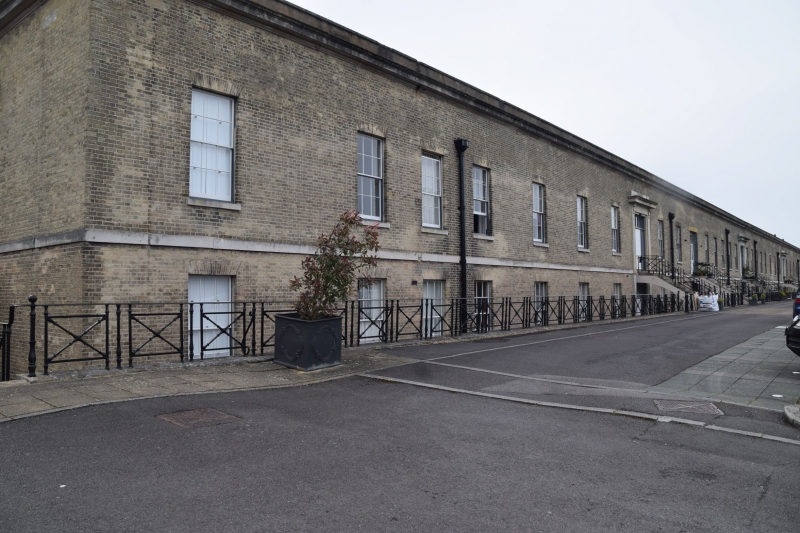 Officers' quarters and attached water tower and railings, disused. 1856-59. Yellow stock brick with lateral stacks and a flat roof. Double-depth axial plan. EXTERIOR: Single storey and basement; 7:8:7-window range. Symmetrical front with a ground-floor band, cornice and parapet; entrances in the ends and dividing the front into 3 sections, have stone surrounds and bracketed cornice, overlights and half glazed doors, front entrances have margin lights, with stairs bridging the basement area. Rubber brick heads to 6/6-pane sashes to both levels. The square water tower to the SW corner stands on round-arches. INTERIOR: contains dogleg stairs from the entrances, with a central passage between rooms, and original joinery, panelled doors and plasterwork. SUBSIDIARY FEATURES: Attached cast-iron railings with panels with diagonal bars to entrance stairs and round basement areas. HISTORY: Contained officers' and servants' rooms, and mess. The barracks were a transit station for infantry built after the Crimean War. They were designed to be bomb-proof, against mortar attack, because of their site just inside the Gosport Lines. This is the only example of this type of barracks in the country, forming a complete group with the Lines earthworks, and marking Gosport's importance in the defences around the Portsmouth dockyard. (Harfield A: The Gosport Barracks, sometimes known as "New Barracks": Gosport: 1988-: 16-21; Plans of the Barracks of England: South Western District: London: 1859-: 8).