A Grade I Listed Building in Ightenhill, Lancashire 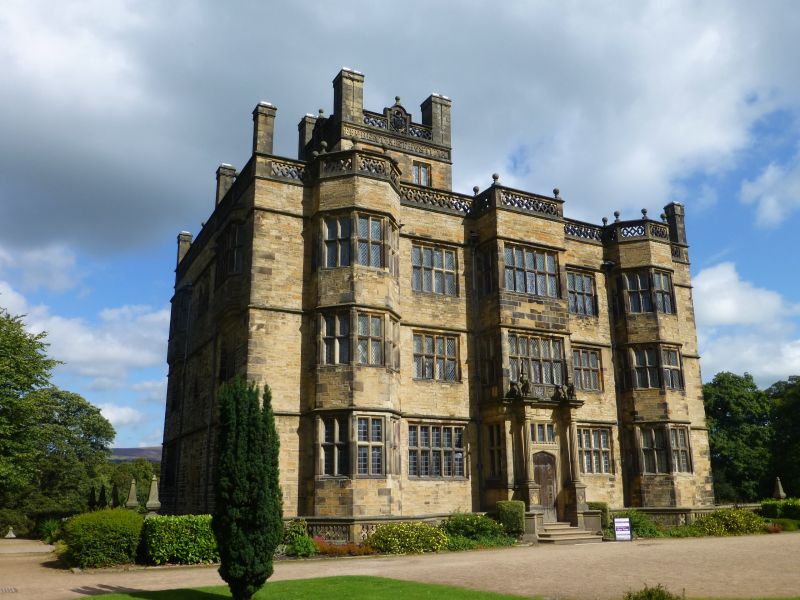 Country house, 1600-1605, for Rev. Lawrence Shuttleworth, possibly to plans influenced by Robert Smythson; altered c.1850-60 by Sir Charles Barry for Sir James Kay-Shuttleworth; now museum. Coursed sandstone with ashlar dressings. This house is the only example in this county of the late Elizabethan type associated with Smythson (e.g. Wollaton, Hardwicke, Bolsover, Worksop). Relevant features of the building are: the compact plan within a rectangle, surrounding a tower (which is off-centre and possibly of medieval origin); the high 3-storey elevations over a basement kitchen (basement exposed at rear making 4 storeys) with the tower rising above; the symmetrical 5-bay facade composed of full-height porch and flanking semi-octagonal bays; and the internal plan placing the great hall not in the centre but to one side. Original interior features of particular interest are the screen and gallery in the hall, the panelling and plaster work in the dining room (now drawing room), overmantels in two 1st floor chambers, and the long gallery on the 2nd floor. (For full information and other references see: VCH Lancs; Country Life 10 May 1913; Shuttleworth Accounts 4 vols Transactions of the Chetham Society, 1856; Mark Girouard Robert Smythson and the Elizabethan Country House (2nd edn,1983, pp.191-2); D.R. Buttress Gawthorpe Hall, National Trust 1979; and Pevsner's North Lancashire.) Included in the item is the surrounding C19 balustrade c.2 metres from the walls of the house which is of stone in Jacobean style openwork, with obelisk finials on the pedestals.

In the 1850s, the owner of Gawthorpe Hall, Sir James Kay-Shuttleworth, befriended Charlotte Bronte (1816-1855), introducing her to Elizabeth Gaskell, her fellow novelist and future biographer. It is thought that a chill caught whilst walking at Gawthorpe contributed to Charlotte’s death in 1855.