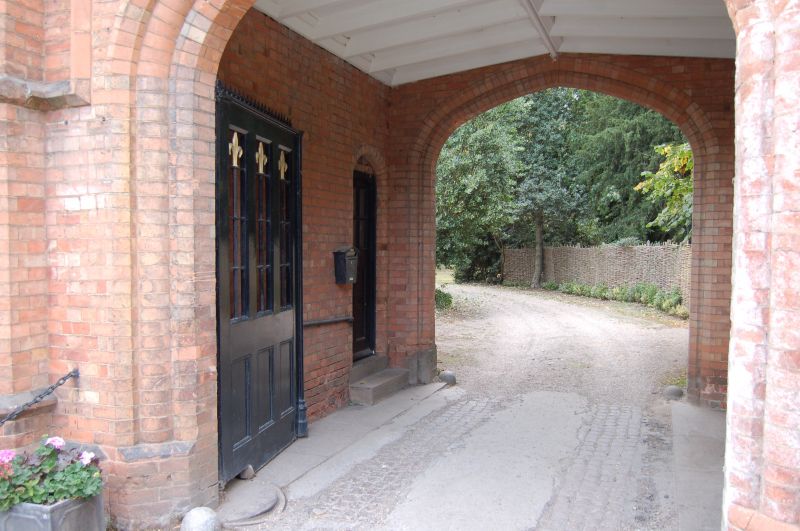 THRUMPTON CHURCH LANE
SK 53 SW
(north side)
2/127 Gatehouse and
Gatehouse Cottage
G.V. II
Gatehouse and adjoining cottage and wall.c.1830 for John Emerton
Wescomb. Red brick, some blue brick. Gatehouse with 2 embattled
and panelled octagonal turrets, being corbelled out at the top,
set onto moulded plinths and of 2 stages with bands. Extending
between the turrets and over the moulded Tudor arched gateway is
an embattled parapet. Hood mould over gateway rises to
accommodate a carved shield. Above and under the embattlements
is a single 3 light ashlar mullion casement flanked by single
flush blue brick lozeznge panels. Attached to the right is a red
brick wall with ashlar coping and extending about 4 metres,
terminating in Elm Cottage listed as a separate item. to the
left of the gatehouse is the single storey, single bay cottage,
with plain tile roof, hipped to the left, single ridge red brick
stack and embattled parapet with band extending under. Set on a
plinth. Single 4 light ashlar mullion casement.