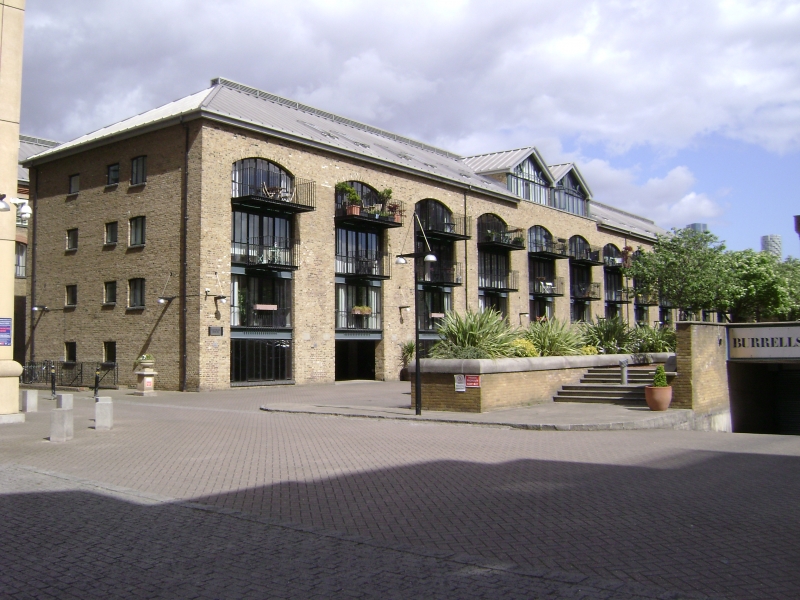 2.
C1860, built as part of the Millwall Ironworks and with some later alterations
and extension on conversion to paint works at the end of the C19. Three parallel
stock brick ranges, that beside main yard and set further back from river
front the largest side elevations of 3 lofty storeys with large segmental
arched windows through 2 storeys and similar large windows to top floor.
Massive, corbelled gable end towards road has triple group of blocked round
arched windows beneath apex. Against the south gable end towards the river
and commanding the site is a Vanbrughian parapeted water tower with blind
arcading to top hamper. A later works entrance screens the ground floor towards
the wharf. Inside there are timber floors in part still supported by original,
tall cast iron columns. The roof structure has coupled queen post collar
trusses over 8 broad bays; the attic floor laid over the tie beams apparently
served as a mould floor. The east elevation to the main yard has a lean-to
against the high ground floor with a 1½ storey parapeted centrepiece containing
the main entrance. The lower parallel west rouges have hipped slate roofs.
Stock brick with engineering brick dressings and some red brick trim to the
parapeted centre pieces of the sides. Segmental arched windows. Interior
structure has undergone some later alterations with concrete encased stanchions
and girders. Built against the south end of the westernmost range, on the
river front a substantial circular chimney stack lopped of its upper third.
Historically interesting site. The Millwall Ironworks site had its heyday
slightly earlier than the presumed C1850 date of the present buildings. From
1855-58 Sir William Fairbairn built early iron ships here and undertook the
model tests for the development of the Menai Tubular Bridge. He was succeeded
by John Scott Russell who built the "Great Eastern" for Brunel here (launching
site adjoins). In 1860 the site was acquired by the shipbuilder C J Mare
and. the existing buildings are now some of the very few remaining, representative
of London's once extensive shipyards.
The whole group, dominated by the water tower and the chimney stacks, forms
an imposing mass seen from the Thames and the Surrey Shore.