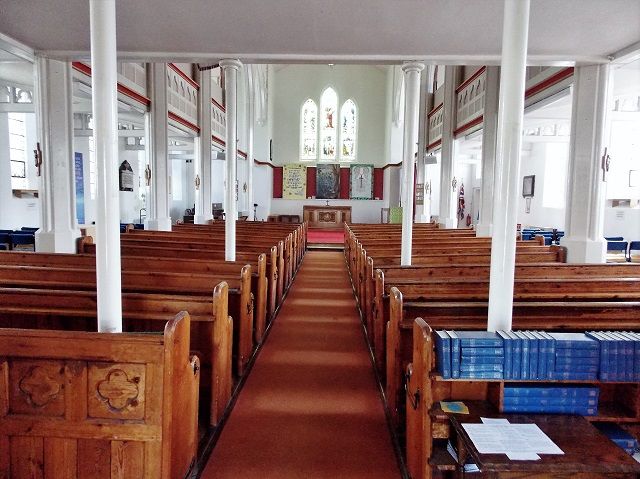 PLAN: Nave, chancel, N and S aisles (expressed internally only), W tower with staircase vestibules to the N and S of it.

The church is oriented S so all directions given here are liturgical.

EXTERIOR: The church is built in a plain lancet style, typical of the 1830s. The W tower is of three stages, the lowest containing a plain arched doorway, the second an attractive and unusual rose window, and the third the belfry windows which are tall, paired lancets. The tower is crowned by a plain parapet with pinnacles at the corners. The rest of the church also has a plain parapet. The nave is of seven bays and has shallow buttresses demarcating the bays, each of which contains a tall lancet window. The chancel is short in the pre-Victorian tradition, has blank side walls and an E window consisting of three graded lancets. Either side of the tower are vestibules with N and S entrances and which were designed to house stairs to the galleries. On the W wall of the S vestibule is an interestingly designed bronze monument to J S Keddell (died 1870) and which bears masonic symbols.

INTERIOR: The walls are plastered and painted: white paint has also been applied, regrettably, to most other surfaces too. The interior character stems largely from the presence of the galleries on three sides (no galleries in the two E bays of the nave). Whereas most 1830s churches of this type had galleries round three sides of a rectangular, aisleless space (with the supporting columns and space beneath the N and S galleries forming their own aisles), here there are fully developed aisles with tall arcades behind which the galleries are set. The tall piers of this arcade have octagonal bases above which the main part of the pier has flat surfaces on the diagonals and small shafts in the cardinal directions. The piers merge seamlessly into the arches, which rise almost to roof level without the presence of capitals. The W part of the gallery also has four cast-iron columns to support it. The roof trusses consist of tie-beams with panel tracery above them. The underside of the ceiling consists of flat surfaces of plain plastering.

PRINCIPAL FIXTURES: The chancel has been cleared of its Georgian or Victorian fittings (presumably in the 1970s reordering which is probably the time of the painting over of all internal surfaces). The Victorian seating in the nave, with shaped ends, is largely intact however. The gallery fronts have trefoiled arcading. On the N and S sides the galleries have been boxed in to create storage space. The font is Victorian and is octagonal with a sturdy base with gable-like features surrounding it. The stained glass in the E window is dated 1902.

HISTORY: The cost of the church was £4,128 of which the Church Building Commissioners contributed £2,595. The church had 1,085 seats, 738 of which were free. The land was donated by Sir Edward Banks and the foundation stone was laid on 1 September 1835. Consecration took place on 30 August 1836 by Archbishop Howley. It was initially a chapel of ease to Minster Abbey, only becoming parochial in 1873.

The architect, George Ledwell Taylor (1788-1873), was born in London and was articled in 1804 to J T Parkinson for whom he supervised the building of parts of the Portman Estate in London. In 1824 he was appointed Civil Architect to the Navy and carried out important works at Sheerness, Chatham, Gosport and Woolwich. He came into contact with William IV and claimed that it was his tact that led the King in 1830 to accept 'Trafalgar Square' instead of 'King William IV Square' as the name for the new open space on the site of the King's Mews. After he lost his post as a result of reorganisation in 1837 he was forced to take up general practice.

The church is relatively unusual in that it did not acquire a long chancel as was usual in Victorian times. Plans to have one were in existence in 1885, drawn up by the Tunbridge Wells architect Robert Wheeler. It seems likely that at this time reseating took place with the introduction of the present open seats with their shaped ends.

REASONS FOR DESIGNATION:
Holy Trinity church is designated at Grade II for the following principal reasons:
* It is of special interest as a church built in the 1830s to accommodate the rising population of Sheerness and was constructed in the plain 13th-century style that was then current. It is a very good representative of urban church building at this time
* It has, unlike many such churches, retained its galleries which are a very important contributor to the character of the building.