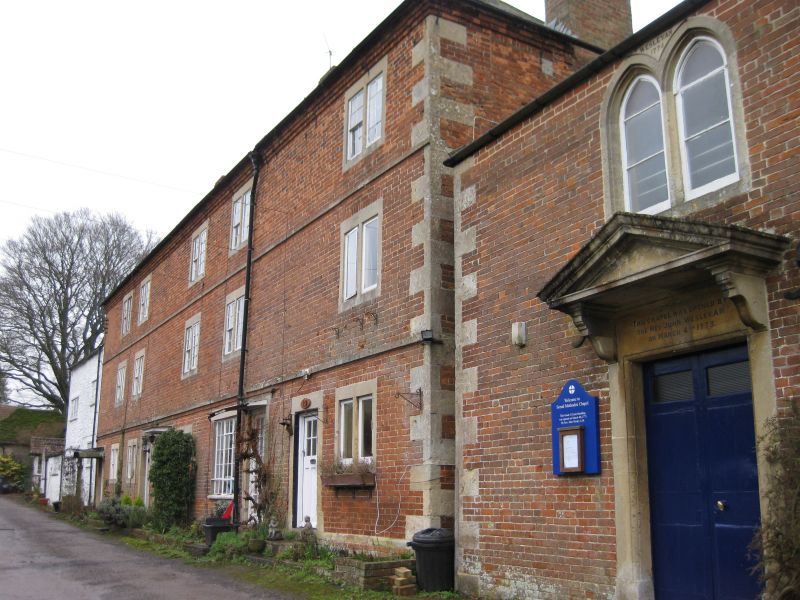 Row of five houses, c1815, red brick with ashlar dressings, slate
hipped roof, two ridge stacks and west end stack. Three storeys
with flush quoins, plinth, two raised string courses and raised
brick eaves. The houses are one-room plan with doors to side of
window-range, doors in flush beaded surrounds, 2-light windows in
flush surrounds with small-paned fixed light and opening sash.
Doors and windows in sequence DWWDDWWDDW. Door lintels raised on
Nos 7, 8 and 9, C20 doors throughout. No 6 has traces of blocked
window-range over door. No 9 has large C20 ground floor window, No
10 has small-paned windows replaced on ground and first floors. In
1814 W. Gaisford leased a row of cottages next to the chapel and
rebuilt them as a spinning factory, which failed in 1827. The
factory was then converted to houses, which had probably been
allowed for in the original design.
(K. Rogers Wiltshire and Somerset Woollen Mills, 1976: 109; E.
Bradby, Seend, A Wiltshire Village, 1981: 83-4).