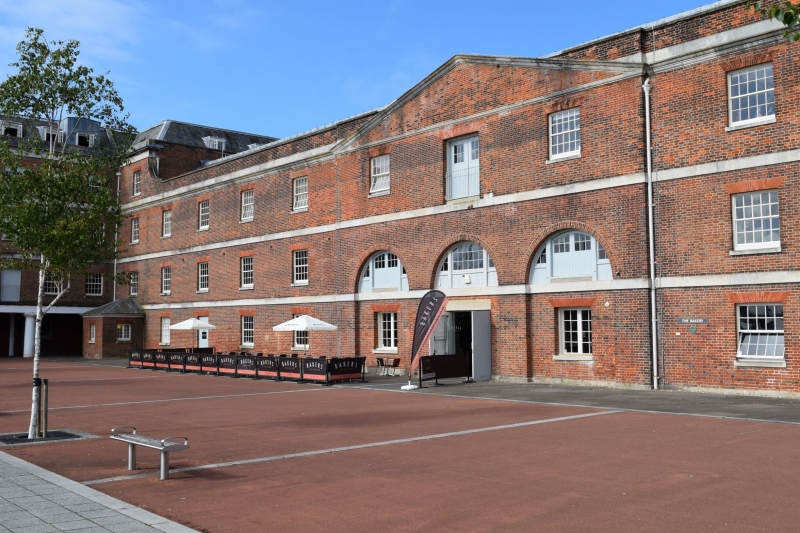 PLAN: Central projecting granary with right-hand mill and bakery with projecting wings each end to the rear, that to the S for the mill engine house; left hand biscuit store demolished. 4 storeys and attic; 7 x 10-window range, with 3 storey; 16-window bakery.

EXTERIOR: An imposing range fronting the river quay, formerly symmetrical with a matching storehouse wing to the left. Ashlar storey bands, eaves cornice and blocking course. Central granary raised on an open ground floor with cast-iron columns, Doric to the front and sides to an iron beam, round underneath with flanged capitals, to lateral and transverse T-section beams with curved upper profiles and spanner ends bolted over the capital enclosing spiggots; lateral beams have cast sockets in the sides for iron joists. Rubbed brick heads to a 10/10 pane sashes, the front has wide loading hoist doors one bay in from each side with platforms on cast-iron cantilevers, and a hoist lucarne in the roof; flat-headed 2-light dormers. The bakery front has a central pediment 3 bays wide, with double ground-floor doors, first floor lunettes and a central second-floor hoist door, and a similar bay treatment one from the right-hand end. 7-window end return projects back beyond rear of the main range; to the S at the rear is a single-storey former office with hipped roof. Attached to the N side of the central wing behind the granary is a former engine and boiler house for the steam engine, with round-arched windows in a matching arcade, and a truncated square chimney. The coal store to the N of the engine house is enclosed by an attached wall between the rear wings.

INTERIOR: The granary has cast-iron internal columns to timber beams, with a shallow roof of timber king post trusses. Bakery has granite open-well dogleg stairs with iron rails, cast-iron posts some with fixings for making partitions. Nine former ovens line a central axial wall, formerly with chimneys rising through the roof, with the mixing room along the front; above was storage space.

HISTORY: Similar in conception though different in plan to Rennie's granary and bakery at Devonport victualling yard (qv), Plymouth. The 1782 wall is a surviving remnant of the fa¿ade to Samual Wyatt's North Store. The machinery was by Thomas Grant, a pioneer in food technology and winner of a Gold Medal from the Royal Society of Arts for his contribution to food technology, ¿2000 Parliamentary Award, and KCB for his role as Director of Victualling during the Crimean War. On a less magnificent scale and more altered than the contemporary Royal William Yard, Devonport (qv), this is nevertheless one of the first large industrial food processing plants in the country, and is indicative of the considerable scale of the navy's victualling operation, on an important site overlooking the river.

(D Evans, The Granary/Mill/Bakehouse complex at the Royal Clarence Yard with the Hydraulic Engine House and the Slaughterhouse, Report for Berkeley Homes, 2000, p. 14)