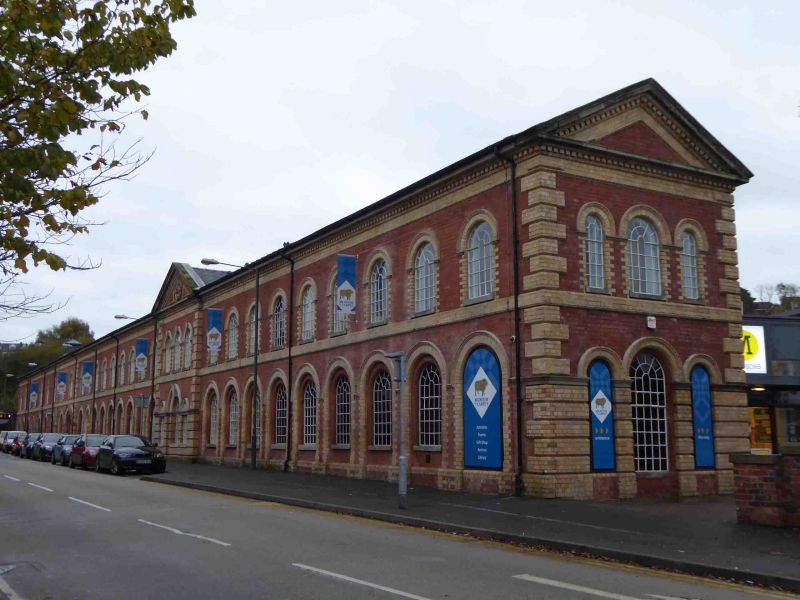 GREENSTREET
954/1/10003
Stour Vale Mills (Woodward Grosvenor and Company Ltd) : Front Range
II
Carpet factory. 1856, extended later C19; by J G Bland for the Stour Vale Mill Company. Red brick with yellow/white Stourbridge brick dressings. Welsh slate and corrugated sheet clad roofs with pedimental gable ends. PLAN: Long range containing offices and warehousing. Adjoining at the rear (south east), and not included, the weaving sheds. EXTERIOR: 2 storeys. North west front elevation 9:3:9 bays with 2 and 7-bay extensions on the left (north east) end. Centre 3 bays breaks forward with pediment. Rusticated white brick quoins, bond and entablature, the centre three bay's with rustication around ground floor windows and with keyed oculus in pediment. Round-headed windows with hoodmoulds and multipane cast-iron frames (first floor altered), centre with keystones, the ground floor centre originally a doorway. Right-hand (north east) designed in similar style. INTERIOR: Altered by conversion to C20 office accommodation. NOTE: Built by the Stour Vale Mills Company in 1856 as a venture to enable Kidderrninster carpet manufacturers to rent space and power for powerloom weaving without having to obtain new premises and looms. The weaving sheds behind were divided into nine separate compartments and there were separate entrances at the front. Many of the large carpet makers such as James Morton and Sons and William Green began here before building factories of their own. SOURCE: A D Goff, The Development of the Carpet Works of Kiddern1inster 1735-1939; dissertation, University of Birmingham (Ironbridge Institute).