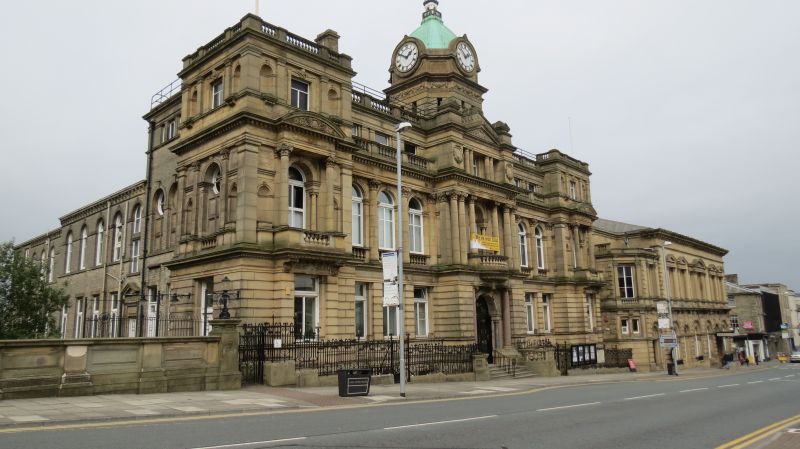 Town hall with police station, Magistrate's Court and public
baths; the police station and court now used for storage and
the baths demolished 1975. 1884-8. By Holtom & Fox of
Dewsbury. Sandstone ashlar (rear wings of coursed sandstone
rubble), with slate roofs and copper-clad dome. Renaissance
style. Large irregular rectangular plan.
EXTERIOR: 3 storeys over basements, plus a central turret,
1:3:1:3:1 windows, symmetrical, the centre and ends projected;
with channelled rustication to the basement and ground floor,
a plain frieze and a cornice over each floor (that at 1st
floor dentilled and that at 2nd floor modillioned),
balustraded parapets and a domed clock turret over the centre
(similar turrets designed for the ends were not built). The
centre has a raised entrance with set-in Ionic columns of
polished pink granite which have sandstone capitals, flanking
a richly-carved round-headed archway with set-in Ionic
colonnettes and elaborate wrought-iron gates; a segmental
balustraded balcony at 1st floor with hexastyle composite
columns (paired and single) and a round-headed inner doorway
with French windows; a simpler and shorter feature at 2nd
floor with tetrastyle Tuscan columns flanked by carved
cartouches; a carved pediment and triangular parapet with
roundels; and on the roof a clock turret with chamfered
corners, a frieze enriched with festoons, a moulded cornice
and a clock-stage with large circular clock-faces and a copper
dome with a wooden domical finial. The projected end bays have
(inter alia) 1st-floor balconies with balustrades and
composite-columned architraves which have carved segmental
pediments, flanked by short coved niches, and pilastered 2nd
floor windows with eared architraves flanked by similar
niches. The 3-bay intermediate ranges have recessed
square-headed windows at ground floor, colonnades of composite
semi-columns at 1st floor containing tall round-headed windows
with balustrades, shorter square-headed windows with pilasters
and balustrades at 2nd floor.
INTERIOR: entrance lobby with wooden former enquiry kiosk on
left side; entrance hall at ground floor and concourse area of
civic suite at 1st floor with original mosaic floors by Maw &
Co. of Shropshire, dados of glazed tile in buff and green with
brown and red bands, large windows of stained and painted