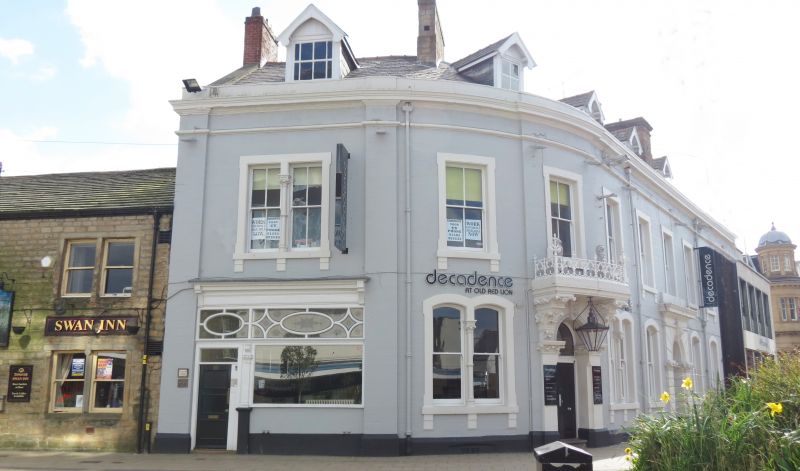 Public house. 1910. By H Thompson of Blackpool; altered.
Sandstone ashlar (Accrington brick at rear), hipped slate roof
with lead-clad cupola. Edwardian Baroque style. Rectangular
plan on corner site, with splayed corner.
EXTERIOR: 2 storeys with two 3-window facades hinged on a
splayed corner surmounted by a cupola; with a chamfered
plinth, a channelled pilaster at the end of each facade, a
moulded cornice with cresting over the windows, and a parapet
with centre panel. The ground floor has a large round-headed
doorway in the centre, with a hollow-moulded surround
including a keystone, a plain fanlight and a pilastered
architrave which has a large cornice on prominent consoles and
a shaped blocking course with rectangular terminals; a large
square 2-light window with arched glazing bars to the left and
a smaller window with circular glazing bars to the right, both
with panelled aprons, moulded sills on fluted consoles and
plain surrounds with moulded cornices (that to the left
segmental-arched). The 1st floor has a round-headed 2-light
casement in the centre with a dentilled lintel to the
openings, a keystone, and a scalloped feature on the cornice
above, and sashed windows either side with prominent sills on
fluted brackets, plain surrounds with enrichment at impost
level, and carved scrolled cresting on the cornice above. The
spayed corner has a round-headed doorway with prominent
imposts, dentilled lintel, and run-out voussoirs with a
keystone, and at 1st floor a semicircular
mullioned-and-transomed oriel window which has a conical base
enriched with swags, ropework enrichment to the transom, and
an ogival cupola with a finial. The left return (to Parker
Lane) is in similar but simpler style.
INTERIOR not inspected.
Forms group with No.18 (Yates Wine Lodge) on opposite corner
(qv).