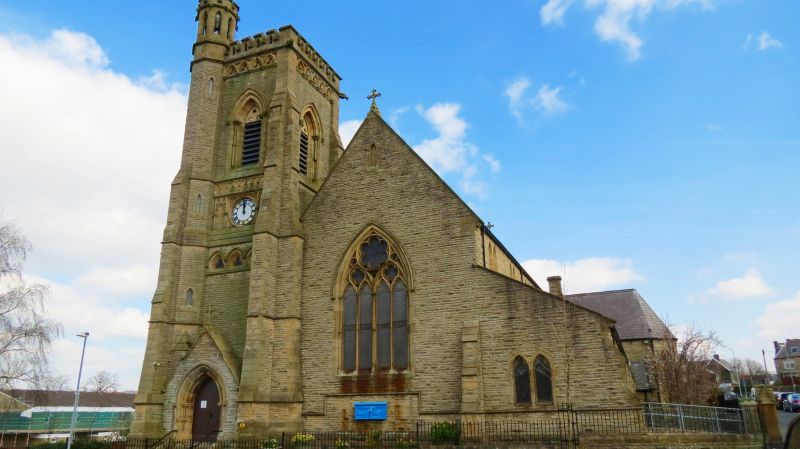 Church. 1876-9, by John Green. Snecked rock-faced sandstone,
slate roofs. Nave with north-west tower, north and south
aisles, chancel with south vestry.
EXTERIOR: the 3-stage tower, with angle buttresses, an
embattled parapet with prominent corner gargoyles, and an
octagonal north-west stair turret terminating in an open
arcade above parapet level, has steps up to a gabled porch
with a 2-centred arched west doorway which has a moulded
surround with set-in shafts of polished pink granite and a
hood-mould with figured stops, and gable coping with an apex
cross; a band of triangular trefoil windows above the porch; a
set-back 2nd stage with a clock face set in Gothic blind
arcading; a 2-centred arched belfry window with shafts, plate
tracery and a hood-mould with figured stops; and a band of
blind arcading below the parapet. The 5-bay nave has a
2-centred arched 4-light west window with trefoil lights and
multifoil tracery; its aisles and clerestory have small paired
cusped lancet windows. The chancel has a 3-light east window
with geometrical tracery; and the vestry forming a wing on its
south side has a 3-sided apsidal south end, buttressed, with
tall traceried lancet windows.
INTERIOR: 5-bay aisle arcades with cylindrical columns which
have prominent carved crocketed caps, carrying
double-chamfered 2-centred arches (the arches of the 2
western-most bays on each side now blocked and parish rooms
inserted at that end); tall 2-centred chancel arch with
moulding including shafts of polished pink granite and
hood-mould with angel terminals; arch-braced king-post roof
with wall-posts supported by detached shafts which have
foliated corbels and caps; stained glass War Memorial west
window.