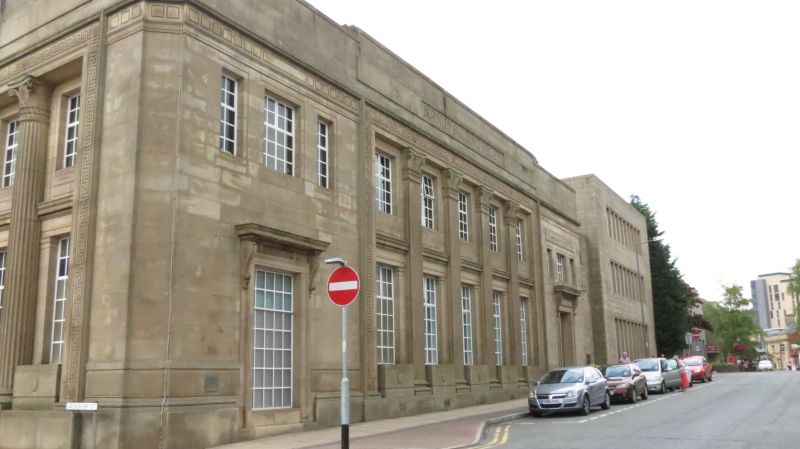 Includes: No.12 Burnley Building Society GRIMSHAW STREET.
Building Society offices, now council offices. 1927-30. By
Briggs and Thornley of Liverpool. Probably steel-framed, with
cladding of sandstone ashlar (roof concealed but probably
slate). Modernist classical style. Rectangular plan on corner
site.
2 storeys over basement with a long 3:5:3-bay east facade to
Parker Lane and a narrow 5-bay south facade to Grimshaw
Street. The latter is framed by a plinth, pilasters, a Greek
key band and a high panelled parapet, and has a set-in giant
colonnade of fluted columns with composite caps including
volutes and anthemions, a large central doorway (altered as a
window) with a raised enriched architrave under a dentilled
cornice on consoles, tall 24-pane windows at ground floor with
projected aprons and metal-framed glazing with tilting
casement openings at the tops, and shorter 20-pane windows at
1st floor with similar glazing.
The east facade to Parker Lane has a wide centre in similar
style but with fluted pilasters rather than semi-columns, and
without the doorway; and doorways in the outer bays (that to
the left altered as a window) with moulded architraves and
cornices on consoles; and the centre of the parapet is
inscribed "BURNLEY BUILDING SOCIETY". At the north end is a
later extension.
INTERIOR altered.
Included for group value.