The Grange and Grange Wing and Attached Balustrade to Rear 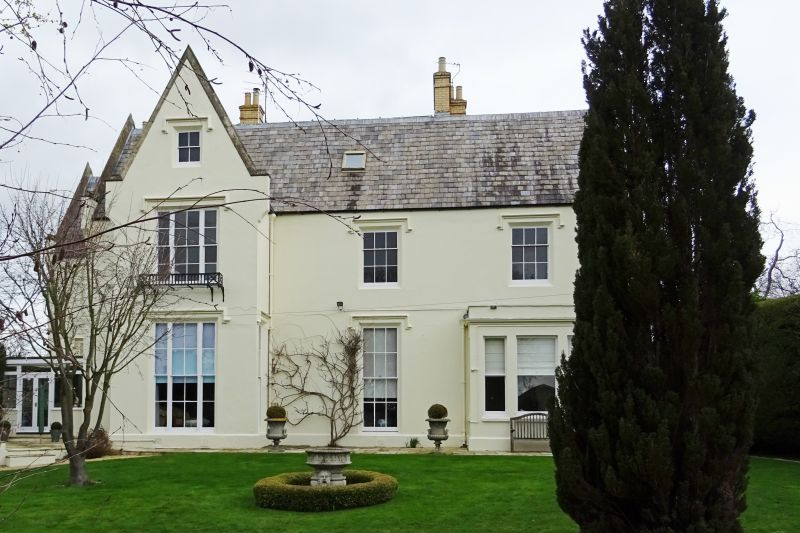 Entry Name: The Grange and Grange Wing and Attached Balustrade to Rear

Villa, now 3 dwellings and attached balustrade to rear. 1838.
By RW and C Jearrad, for Rev Francis Close. Stucco over brick
with slate roof, tall gault brick ridge stacks and iron window
guards and balustrade. Central hallway plan with asymmetrical
facades. Domestic Tudor style.
EXTERIOR: entrance facade has 2 storeys with attics to outer
gabled ranges which project and have linking ground-floor
porch, 3 first-floor windows. Tripartite windows with 4/4
between 2/2 sashes. Windows to left part have external
Venetian shutters. All windows in chamfered reveals and with
hoodmoulds. Attics have 2/2 sashes; further attic roof dormer
to centre has 2 cusped lights with quatrefoil in gable.
Central entrance in chamfered, 4-centred surround with roll
and cavetto-moulded hood and decoration to spandrels;
part-glazed, 9-panel door with sidelights and shaped
overlight. Kneelers and shaped copings to gables.
Garden facade: 2 storeys with attic to projecting gabled bay
at left, 3 first-floor windows. From left, a tripartite window
with 4/4 between 2/2 sashes, some pink-glass panes; tall 6/6
sash and rectangular bay window with 1/1 sashes; first-floor
has tripartite window with 4/4 between 2/2 sashes, two 3/6
sashes; attic has 2/2 sash, all (except bay) with hoodmoulds;
bay has cornice. Kneelers and copings to gable. Skylight. Rear
retains 6/6 sashes.
INTERIOR: to inner hall are 4-panel, part-glazed studded
4-centred doors in chamfered surround. To rear a dogleg
staircase with stick balusters and run-out handrail; otherwise
not inspected.
SUBSIDIARY FEATURES: external slatted shutters at left, to
front facade. Window box to left, first-floor window to garden
facade has arcade and X-motif balusters. To rear a balustrade
to steps with scrolled lozenge motif.
HISTORICAL NOTE: the cost of building was met by public
subscription. Rev Francis Close was appointed to the living of
the parish Church of St Mary, Church Street (qv) 1826-56 by