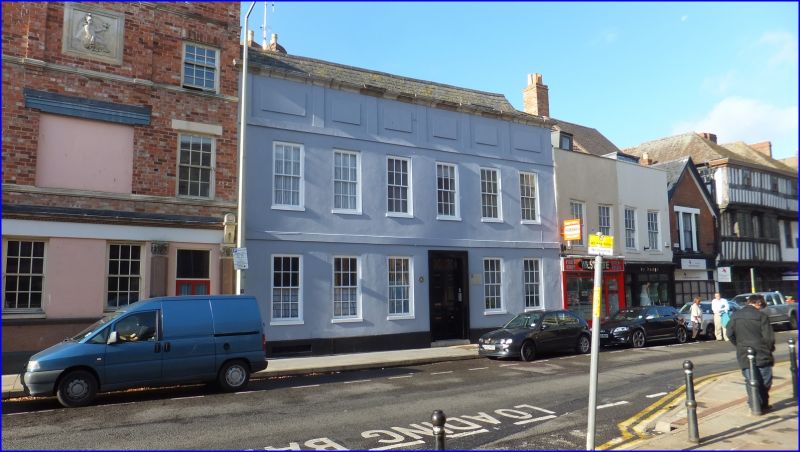 Town house, later a shop and dwelling, now flats. C16,
remodelled C18, converted to shop and dwellings in C19,
extensively restored and converted to flats 1990.
Timber frame, stone and brick, rendered front, slate roof,
brick stacks. Double-depth block with rear wings.
EXTERIOR: two storeys and attic; the front of six bays overall
with a wider bay at each end, has an offset stone plinth, a
raised band at first-floor level and at attic-floor level, and
a tall parapet; each bay is defined by a pilaster strip,
capped by a moulded stone cornice; on the ground floor in the
fourth bay from left the entrance doorway with rectangular
fanlight, moulded architraves, and fielded 8-panel door.
Sashes in each of the three bays to left of doorway replace a
former shop-front, to right of doorway two sashes, and on the
first floor six sashes, all the sashes with slender glazing
bars (3x4 panes) in similar plain openings with projecting
stone sills; in each of the bays of the parapet a raised
rectangular panel, the panels possibly the infills of former
attic windows.
INTERIOR: not inspected.