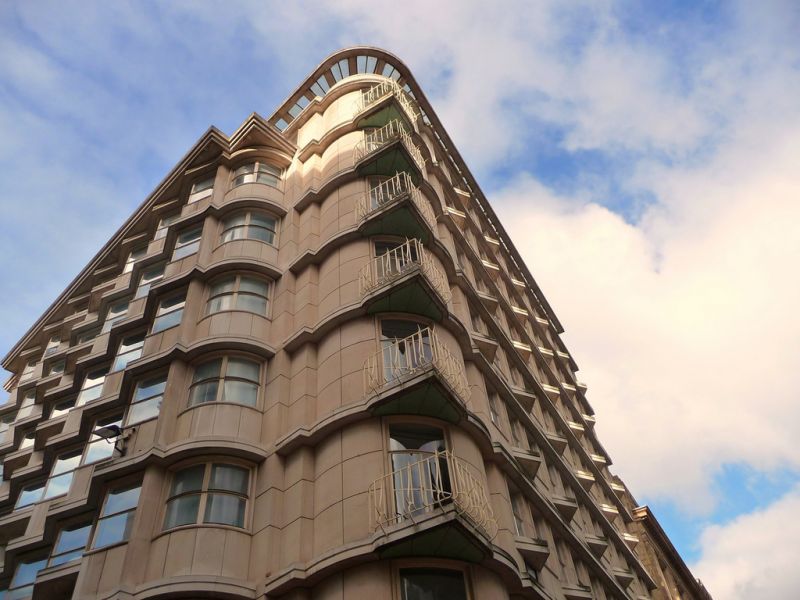 An office building evoking the first Chicago commercial style, built in 1953-5 to a design by the British architects’ firm Cotton, Ballard and Blow.

MATERIALS: the building has a reinforced concrete frame and is clad in artificial stone panels to the main elevations, and red polished granite to the ground floor. The rear elevation has the frame exposed with brick infill. The flat roof is concealed behind a projecting parapet and ‘flying’ concrete and glass cornice.

PLAN: the eight storey building covers a corner plot, with the entrance to the office floors situated on Bennett’s Hill and those to the former bank and shop on the ground floor, situated on New Street.

EXTERIOR: the building has a strongly rhythmic facade to New Street, elements of which are repeated on the Bennett's Hill facade. At the corner the building has a curved 'prow', with small balconies, decorated with coloured mosaic underneath, and each protected by decorative, thin, curved steel balustrades to French windows, overall displaying characteristics of the 1951 Festival of Britain. To the left, the elevation on New Street has curved windows, and that on Bennett's Hill has seven angled bays giving a zig-zag rhythm, ending in another curve, all with pivoted steel windows. The west elevation on Fire Office Passage has a concave return. A deep projecting sill band repeats the undulating pattern over each storey, and a heavily moulded cornice surmounts them forming straight capping. The upper storeys have extra projecting sills to the central windows. Similar triangular sills form an alternating pattern to the otherwise flat Bennett's Hill elevation. The office entrance on Bennett's Hill has large, folding bronze gates in a decorative abstract pattern of interlocking circles. The doors behind are a late C20 replacement. The ground-floor shop windows to Bennett's Hill, are framed in bronze and have red polished granite frames and cladding to the wall. The shop fronts facing New Street, set under a broad canopy, have been extensively remodelled, but the new frames and cladding matches that to the surviving windows at ground floor level facing Bennett's Hill.

INTERIOR: the interiors of the shops, former bank and offices are not of special interest as they have all been remodelled and no longer contain any original fixtures and fittings of interest. However, the entrance hall and stairwell accessed via the office entrance on Bennett's Hill, is of special interest. Although the internal walls to the entrance hall were re-clad in cream coloured marble in the late C20, its layout survives and contains an Art Deco style open well stair with red terrazzo floors (now covered mostly in carpet), lit from above by a rectangular roof light. It has closed balustrades that are curved to the corners, topped with a black tubular handrail supported on slender metal brackets. The section of handrail in the lobby at ground floor level has been replaced with a polished chrome tubular handrail. There are two lifts to each floor. Those at basement level retain their original surround, with those to the upper floor now clad in polished chrome. The lift interiors have been refurbished and are not of special interest.

Grosvenor House is a commercial office building with shops and a bank on the ground floor, situated on the corner of Bennett’s Hill and New Street in the centre of Birmingham. It was built in 1953-5, before the restrictions imposed by Building Licences were removed in 1954, as a speculative office building first occupied by Shell-Mex BP to a design by the architects’ firm Cotton, Ballard & Blow, who also built Campden Hill Tower in Notting Hill, London in 1957-61. Jack Cotton (1903-1964) of Cotton, Ballard & Blow was a Birmingham-born entrepreneur and property developer, behind much city-centre building in Birmingham in the 1930s. Cotton, like his father and grandfather, was a prominent member of the Jewish community in Birmingham. After the Second World War he became a dominant figure in commercial property development in England. His dealings, first as Central Commercial Properties, then as Ravenseft and finally as City Centre Properties, erected new shopping centres and office buildings that transformed England's city centres, especially Birmingham. In the latter years of his life, Cotton invested in the Pan Am Building in New York, USA.

Grosvenor House, situated on the corner of Bennett's Hill and New Street in Birmingham, is listed at Grade II for the following principal reasons:

* Architectural interest: a rare and delightful example of the 1950s contemporary style at its most energetic; it displays an unusually cohesive design with interesting, good quality architectural detailing;

* Rarity: it is an imaginative and richly detailed example of a 1950s speculative office building erected before the removal of wartime restrictions on construction by Building Licences in 1954;

* Interior: although the majority of its interior has been remodelled, the original entrance lobby with Art Deco style open stairwell is of a good quality bespoke design displaying interesting use of materials, expressing the smart image of the public parts of this office building as desired by its first occupants;

* Degree of survival: despite the alterations to the shops facing New Street, and the loss of the original office interiors above, for a commercial office building, which are generally prone to change, it has survived remarkably intact.