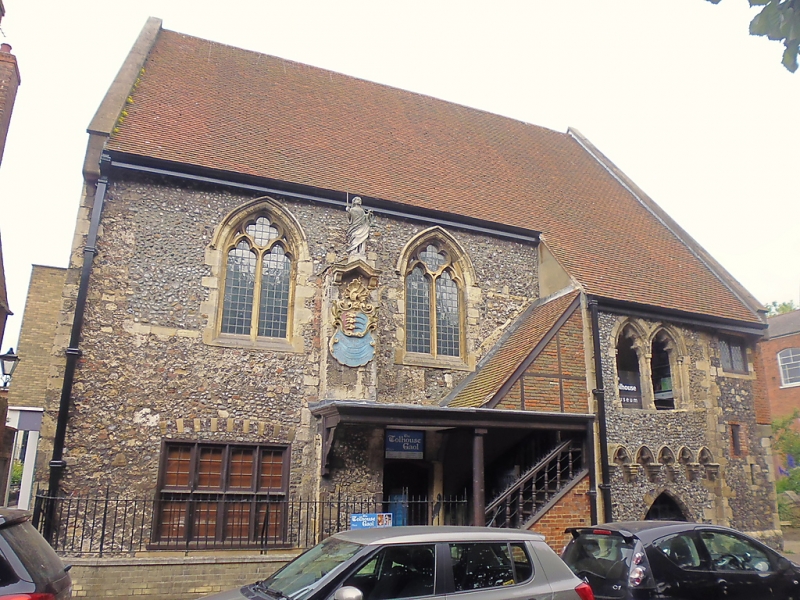 Formerly known as: The Tolhouse MIDDLEGATE STREET.
A merchant's fortified house. Begun c1150 and altered c1250.
Hired to the Borough in the C14 and purchased by them in 1552.
Used for a variety of civic functions: prison (1261-1875),
town hall (to 1882), police station, court house and toll
office. Restored in 1883, when the rear wing was demolished,
bombed April 1941 and restored 1960-1. Used as a museum and
library from the 1880s. Fortified first-floor hall house
illustrating early adaptation of military architecture to
domestic purpose. Flint with some ashlar and ashlar dressings.
Plain tiled roof. The north gable wall has been rebuilt C20,
and the south gable wall largely rebuilt.
EXTERIOR: the east front is of 2 storeys. 3-window range in
all. To the left is a 4-light transomed casement of 1960
copying one inserted in 1622. To its right is a flat buttress
with a statue of Justice on the top and a cartouche with
Yarmouth's coat of arms (3 Royal lions dimidiated with herring
tails) and the name of the Mayor in 1781, William Fisher.
Right again is a forebuilding added c1250 in front of a
blocked arch of c1150. The forebuilding has a staircase rising
to the entrance door of the first-floor hall. It has a pointed
arched grille opened in 1883 and a corbel table of trefoiled
machicolations beneath a pair of arched unglazed cinquefoiled
windows. The main hall is lit through two 2-light Geometric
windows with encircled quatrefoils. They are of 1883 replacing
2 wide transomed casements. To the extreme right is an added
C14 or C15 bay lit through 2 slit vents and a C20 2-light
leaded casement.
INTERIOR: the first-floor hall is entered through a pointed
arched doorway with 2 orders of colonnettes with dog-tooth
decoration in the jambs. The hall has a further doorway
leading to the former south-west wing and 2 window embrasures.
Crown-post roof of 1960. The basement is divided into 2 rooms.
The north room has 4 detention cells protected by an iron
screen of circular-section verticals. 4 oak cell doors with
heavy gate latches. The cells are oak-lined and each has an
air vent in its barrel vault. The cells were proposed in 1796
and erected soon after. The added north bay has the remains of
a winder staircase. Scheduled Ancient Monument.
(Great Yarmouth Gaol: Norwich).